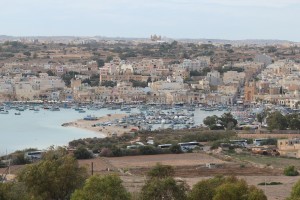 Over the last year, the planned removal of the large chimney stack at the Delimara power station, built in the early 1990s, has been promoted as a significant event. It has been announced repeatedly in the press that this particular ‘ugly chimney’ is going to be demolished. The expected removal of the chimneys belching smoke at the Marsa power station, another prominent and polluting industrial monstrosity visible for miles around, has not received quite the same attention so far.

The recent Environmental Impact Statement for the new gas-fired power station at Delimara shows that some Marsaxlokk residents consider the removal of the old chimney to be particularly important. The social survey was carried out last June, long before the photomontages of the proposed new power station with its new chimneys were available. The images can now be viewed here.

The closure of ‘Phase 1’ of the Delimara power station, built some 20 years ago and to which the 150m chimney belongs, is obviously good environmental news, but special credit is also being given to the removal of its chimney.

I can’t quite see how the replacement of one 150m chimney with what is to now be six new chimneys – three of 75m and three of 30m – plus a large new industrial plant onshore and a massive gas storage vessel berthed permanently in Marsaxlokk, can be perceived as a notable visual improvement to the bay. At the very best it’s six of one and half a dozen of the other, as far as the landscape goes.

The EIS provides some insight, explaining that residents of Marsaxlokk view the chimney as, “the symbol of the manner in which the south is treated whenever large scale and often polluting operations are required.” (367)

Not solely an environmental or economic issue then, but linked to cultural perceptions of ‘the south’. The chimney stack has been transformed into a symbol, and therefore its demolition is presumably also being treated as symbolic.

The social study notes candidly that Marsaxlokk residents are, “accustomed to living in an area that is ear-marked to include Malta’s major power station both in present times and for the foreseeable future” (15) and says that, “although people in the lower socio-economic groups benefit the least from the development and construction of major industries in their communities, they are at the same time the least-likely sectors to provide organised resistance. Indeed, many of the interviewees who took part in the fieldwork found it difficult to articulate how the construction and development of a power station in their locality has and is affecting their lives.” (15)

I think there is more to it than socio-economic realities. The entire energy sector in Malta seems so mired in political party grandstanding and lobbying that it is just about impossible to get a straight word in. Everything in this sector has multiple meanings, just like the Delimara chimney.