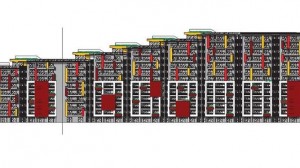 At around the time when the outline permit for Mistra Village was granted in 2008 and I was involved with Din l-Art Helwa, I had written articles in the press voicing my disagreement with the project.

Four years later, when I was director for environmental protection at MEPA in 2012 the project came up again. While acknowledging that an outline permit had been granted, I still felt that the visual impact of the project was critical and that it was my duty to point this out.  In around May or June 2012, I wrote a memo to the MEPA chairman which was circulated to the board members and discussed. This memo recommended that an attempt should be made to reduce the height of the project substantially.

New plans were submitted sometime later that year and I wrote a second memo in around December 2012 which was again circulated to the board and discussed. Here I had noted that while an effort had been made to reduce the visual impact, further improvements should be pursued. I remember emphasising the importance of ensuring a high quality design due to the prominence of the site and the high visual impact.  I left MEPA before the final plans of the project were concluded.

I am only providing these details to set the record straight, as I was drawn into the story in an email this week which claimed that I somehow “approved” the outline permit of this project with 950 apartments, and which is mistaken. I have consistently held quite strong views about the visual impact of the Mistra project.

This email was a reply from the Prime Minister to somebody lobbying against the highly controversial Mistra Village project, as follows:

I am obviously the ‘ex-direttur tal-ambjent’ mentioned in this email, in which I was not copied initially but in which I was later copied by someone else. The first thing that struck me is that the reply is incorrect. I then wondered why I am mentioned in this reply in the first place. I have to assume that a similar official reply may have been given to other queries and circulated.

It is of course possible that Dr Muscat was provided with the wrong information, and that the reply was drafted by somebody else. He has every facility to look up these two memos mentioned above and the relevant board minutes and see for himself, and he can publish the memos if he wishes to do so.

He will see that at no point did I “approve” the outline permit. It is also incorrect to claim that it is this administration which initiated discussions about a reduction in height and volumes, as these efforts were already ongoing in at least 2012 as is evident above.

UPDATE WITH REPLY FROM THE PRIME MINISTER, 2nd November 2013 – Since the publication of this blog post on 1st November 2013, the Prime Minister has corresponded with me and stated: “I take this as being the correct version of facts. Thank you for clarifying.”

I am grateful for the prompt response.

*Translation: “I am informed of these facts: The outline permit was granted for 950 apartments. This is now the owner’s right. The outline was also approved by the ex-director of the environment, who had represented the NGOs against the project. MEPA, during this administration, entered into discussions with the developer to reduce the height and to reduce by 200 apartments.