Din l-Art Helwa (DLH) has reviewed the 2015 EIS Addendum which was submitted to MEPA following a revised master plan for the development in caption.

In determining applications for planning permission, MEPA shall have regard to the following points:

a) safeguard the wealth of archaeological, ecological and scenic heritage found at the top of the plateau from built development, trampling and tipping;

b) restrict the tourism related development on the eastern flank of the promontory;

c) encourage the upgrading of the existing facilities near the hotel provided that development of tourism related or other facilities are maintained at a minimum distance of 50m from the coastal cliffs and sufficiently away from the northern escarpment;

d) safeguard the area indicated on MAP 13.6 for free and unhindered coastal access;

e) protect a pedestrian path shown on MAP 14.11-E running parallel to the northern carriageway route which links the hotel to the Villa Area for free and unhindered public access;

f) ensure that the overall height of the development does not increase in the area closest to the northern escarpment or the coastal cliffs;

g) restrict development within 50m of the inland most tier of the coastal cliffs anywhere along their length;

h) prohibit developments and/or activities that may negatively affect the colonies of breeding seabirds in the cliffs below Ta’ Cenc. This includes both land-based and sea-based activities.

Unless otherwise specified in this policy document, development in these areas shall be restricted to the maintenance of existing traditional coastal features with no lateral increase in built footprint or vertical increase in height of the built structures. The relevant coastal areas may also be safeguarded for their ecological, natural heritage or landscape importance as indicated through policy GZ-RLCN-1. 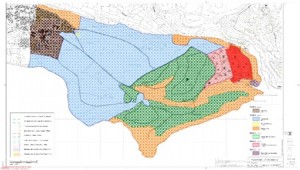 2.3.1 The value of the landscape at Ta’ Ċenċ is considered as being high. This is due to several factors including the following: