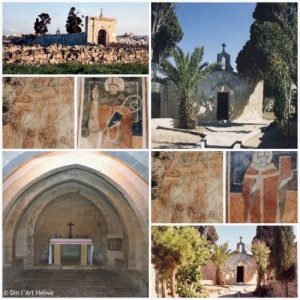 The lecture that was to be delivered in March by Prof. Anthony Bonanno has been postponed to Thursday 23 April at 18.30,  at Din l-Art Helwa, 133, Melita Street, Valletta.

Prof. Bonanno will take a quick journey down memory lane to recount  two personally experienced episodes in the biography of the Annunciation Church of Hal Millieri. The first was the excavation carried out jointly with Dr Tom Blagg and Dr Anthony Luttrell, below half of the flagged stone floor of the church, revealing intact burials, fragments of fresco painted plaster, and other items of material culture (mostly pottery) dating as far back to the Roman period and exposing the foundations of an earlier church datable to the 13th century. The second episode constitutes a landmark in the history of conservation in Malta, when the prevalent method of physical detachment of fresco paintings from their matrix was abandoned in favour of preventive measures of conservation accompanied by the least invasive intervention.

Prof. Anthony Bonanno, B.A. (Hons) (Malta), D. Lett. (Palermo), Ph.D. (London), F.S.A. is Professor of Archaeology at the University of Malta where he has lectured in Archaeology and Classics since 1971. He has also conducted lecturing visits to various universities in Europe, the United States, Zimbabwe and Egypt. Besides being a Fellow of the Society of Antiquaries of London, he has been appointed “corresponding member” of the Institutum Archaeologicum Germanicum and of the Archaeological Institute of America.

He has served on various national boards and committees, including the Planning Authority (1992-1998), Heritage Malta (2004-2011) and the Scientific Committee for the Conservation of the Megalithic Temples (2004 to date).

Prof. Bonanno has served on the Council of Din L-Art Helwa for more than three decades and has been the association’s Executive President between 1999 and 2001.

The talk willl be delivered in English Donations to Din l-Art Helwa will be appreciated. info@dinlarthelwa.org  Tel 21225952