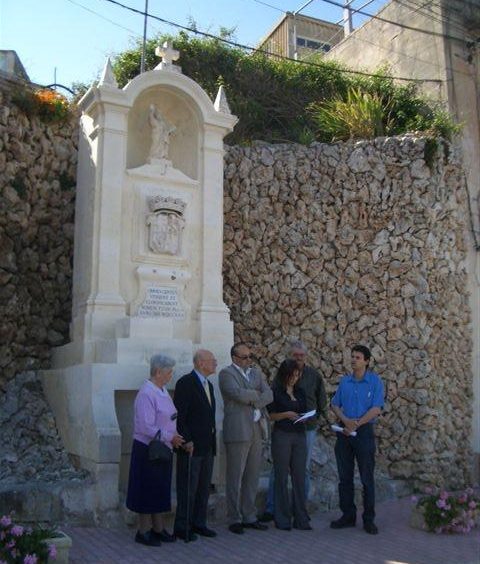 The well known Ghajn Razul Fountain in St. Paul’s Bay, just past the Veccia, was restored for the second time in 2009 by Din l-Art Helwa. This project is part of Din l-Art Helwa’s ongoing restoration of local landmarks and was funded by the heritage organisation’s own Restoration Fund and the St. Paul’s Bay Local Council.

The fountain had already been restored by the heritage organisation in 1989, and twenty years later, Dr. Paul Asciak, Life Time Member and veteran volunteer of Din l-Art Helwa was present for this second inauguration of its restoration in 2009, together with Mrs. Asciak, herself a member then of the Istitut Socjo-Kulturali San Pawl, Mayor of St. Paul’s Bay Graziella Galea, and Martin Galea, Executive President of Din l-Art Helwa.

Dr. Stanley Farrugia Randon, Council Member of Din l-Art Helwa coordinated this restoration project together with the St. Paul’s Bay local council, and in particular with its Mayor who expressed her satisfaction at the close collaboration that has always existed between the Council and Din l-Art Helwa in initiatives that have brought about positive action in the locality.

The stone conservators were Ingrid Ross, James Licari and Frank Chetcuti from Heritage Malta. Speaking for Din l-Art Helwa, Dr. Farrugia Randon said that as Malta is nearing the end of the Pauline year, it was appropriate that Din l-Art Helwa undertake to save this fountain which is another monument dedicated to the coming of the Apostle nearly 2000 years ago. Din l-Art Helwa restored St. Paul’s Statue on the islands in 2008.

The Ghajn Razul limestone fountain stands about 15 courses high and bears a marble plaque with a Latin inscription dated 1725 which is surmounted by the coat of arms of Grand Master Wignacourt. A niche at the top of the monument contains a small carved statue of St. Paul. The monument as it stands today dates to post 1900, however the statue of St. Paul, the plaque and coat of arms are of a much earlier date.

The origin of the Ghajn Razul fountain is lost in history however tradition holds it that when St Paul was shipwrecked on our islands he touched the rocks and water started gushing out as a spring and this immediately gave succor to those on board the shipwreck. The word Ghajn means spring while the word Razul is an Arabic first name denoting that the place could have belonged to or been found by somebody by that name.