The Great Siege Monument in Valletta 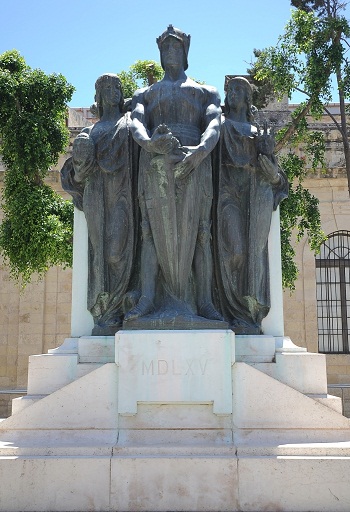 The monument commemorating the Great Siege of 1565, an Antonio Sciortino masterpiece, was the focus of a conservation initiative which aimed to preserve this major Valletta landmark for future generations. The project was sponsored by Malta-based trade finance institution FIMBank plc and coordinated by heritage NGO Din l-Art Helwa.

This well-known sculpture, which is located opposite the Law Courts in Republic Street, Valletta, was installed in 1927 and consists of a granite base with three bronze figures above. The female figure on the left represents Faith and carries a papal tiara in her outstretched hand, while the one on the right, which carries a mask of Minerva, represents Civilisation. These female figures are wearing flowing dresses as well as a band in their hair. The central figure is a muscular male representing Valour, and holds a sword in his right hand which points down the centre of the monument. He is also holding a shield with his left hand. The male figure is wearing half a suit of armour as well as a three-pointed crown.

The project took place in the summer of 2010 and was concluded in time for the annual wreath-laying ceremony held on the 8th of September, the National Day known as ‘il-Vitorja’ (the Victory).
The Heritage ResCo conservation team, composed of academically trained and experienced conservators Ms. Ingrid Ross, Mr. James Licari and Mr. Frank Chetcuti, were entrusted with the cleaning and preventive maintenance of the Great Siege Monument. They co-ordinated the works together with architect Dr Claude Borg of the Restoration Project Office (Valletta Mdina Kottonera Rehabilitation Project – VMK), which falls under the Ministry for Resources and Rural Affairs. The VMK also provided the scaffolding as a further contribution towards this project.

The conservation works primarily addressed the effects of unfavourable atmospheric conditions, in particular the natural weathering process caused mainly by salt deposition, acidic bird droppings as well as past interventions.

The project was being dedicated to the memory of the former Curator of the National Collection of Modern and Contemporary Art, Dr. Dennis Vella, who passed away in 2009.