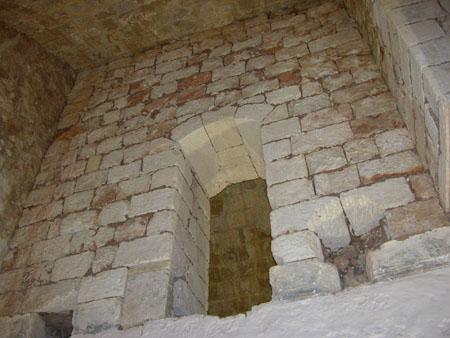 There was a time in the late middle ages, when a journey across the Fliegu, the channel between Malta and its sister island, Gozo, was undertaken at great peril. Midway across the channel was the small island of Comino. Rather than the idylic and tranquil location that it presents today, however, Comino was then a treacherous haven for pirates and corsairs, a ‘nidu et latibulu di li … sarrayni’, hiding inside its cliff-side caves, waiting to pounce upon hapless and unarmed boats plying between the islands.

The Maltese and Gozitan authorities were understandably very concerned with this state of affairs. As early as 1418, we find the Università of Malta determined to build a tower on Comino. But it was only in the early seventeenth century that the opportunity finally presented itself. On 11 October, 1618, Grand Master Alof de Wignacourt informed his Venerable Council of his intention to erect a tower at his own expense on the island of Comino. This was to be the sixth in a series of seven coastal towers built during his magistracy – the others (not counting Garzes) were sited at St Paul Bay (1609), St Lucian (1610), St Thomas (1614), Marsalforn (1616 – paid for by the Order) and Sta Maria Delle Grazie (1620). At 17,628 scudi, the Comino tower was to prove the costliest of them all. Work on it began in 1618. Traditionally, the tower is said to have been designed by Vittorio Cassar. For some reason Gian Frangisk Abela, writing in 1647, attributes its design to him but Cassar is now known to have died in 1609.

A unique feature of the Wignacourt towers (except for the Marsalforn one built in 1616) is their corner-turrets, rudimentary and embryonic forms of bastions. These projecting corner turrets, like bastions, were designed to provide a degree of flanking fire. Rather than being simple towers, therefore, Wignacourt’s coastal structures were veritable gunpowder forts, or fortini, as they were frequently called. The towers’ solid manner of construction, their thick masonry walls (about 6 m at the base) and barrel-vaulted interiors a’ prova di bomba, also shows that these fortifications were designed to act as more than lookout posts – they were designed to absorb punishment and mount heavy pieces of artillery, guns which were required to engage enemy ships over long distances.

St Mary Tower (as the Comino Tower came to be called) has many unique and interesting features that set it distinctly apart from its sister structures. To begin with, there is its height of 65 feet (19.6m), some 25 ft higher than the other towers – an extension deemed necessary to provide a commanding view over the island and its environs. This extra height is frequently attributed to the masonry plinth, on which the tower is said to be raised. However, this is only an illusion, for the so-called ‘plinth’ is actually an external buttress designed to reinforce the base of the vaulted structure in order to counter the lateral thrusts of two superimposed barrel-vaults. Internally, the tower’s structure consists of two barrel-vaults, one built above the other

The plinth gave the tower a unique profile, particularly since the passage created along its upper part was enclosed by a wall and roofed over to provide a defensive feature in the form an all-round musketry gallery pierced with loopholes for close-in-defence. The roof of this musketry gallery was covered with a ceiling of stone slabs (Maltese xorok) resting on wooden beams set into the wall of the tower, as evidenced by the line of log holes running all way round the tower. This defensive is referred to in one of the contemporary documents as a ‘strada coperta’ but in effect it was more of a sort of covered faussebraye. This interesting feature, only traces of which have survived, would have given the tower a totally different profile from that visible today, as can be shown in a seventeenth century ink drawing of the tower found in one of the Order’s documents at the national Library in Valletta shows. The 3D graphic reconstruction provided below seeks to capture the original form provide by the missing musketry gallery, a unique feature in many ways and one that would have given the tower the appearance of a blockhouse, similar to the tour-reduits built later in the eighteenth century by French military engineers in the American colonies.

The musketry gallery also contained the outer gate and drawbridge mechanism which was approached by a detached flight of steps and served by a wooden bridge. The main entrance doorway into the tower itself, unlike in the other towers, however, was not set in the middle of the elevation and in line with the detached flight of steps, but was instead offset to one side of the facade.

Externally the tower had another defensive feature in the form of a countermined glacis. This glacis, which still survives, is also unique in that it it is constructed out of loose rubble stone (Maltese gagazza) rather than the usual earth. The counterscarp was pierced by the entrances to the short countermine tunnels (as shown in the 17th century sketch). Traces of one of these vaulted shafts with its circular vaulted ‘forno’ was located by the author (see photograph below), but the rest all seem to have caved in.

Remains of vaulted circular explosive chamber (forno) in the rubble-type of glacis enveloping the tower.

This raised glacis created an artificial ditch which was accessed from within the tower by a sally-port fitted with portcullis situated at the foot of the east face of the plinth. A second sally-port on the opposite west face of the tower was apparently blocked-up sometime during the construction of the tower, since, although visible from the inside, no traces of any openings appear on the exterior wall.

Above, view of the sally-port on the east face of the plinth. The sally-port was served by a portcullis, the shaft of which can still be seen set within the vaulted ceiling of the passageway leading to the sally-port (below).

The tower’s sturdy internal vaulting was also designed to allow the structure to mount heavy pieces or artillery on its roof, thereby allowing it to serve as a coastal battery protecting the approaches to Mgarr harbour. From Fra Renato de Gras inspection of the tower in 1722, weknow that the tower was mounted with five guns (three bronze and two iron pieces) all of which were ‘in buonissimostato’. De Gras, who was the Commander of Artillery, recommended that each gun was to have enough ammunition to fire at least thirty rounds while the total amount of gunpowder in its holdings was to be increased to 10 quintali. De Gras also recommended that the number of cannon be increased if the tower could take the weight (‘se la sua piattaforma lo permette’). His advice seems to have been implemented for an inventory listing the tower’s armament in 1761, does mention six guns, two iron 12-pounders, one bronze 10-pounder, one bronze 4-pounder and two bronze 3-pounders. For some reason, however, the tower’s armament does not feature in Knight Commander St. Felix’s inventory of 1785 while that of the nearby battery (St Mary’s Battery, built in 1715 – see photo below) is included. In 1631, three bombardiers were allotted to the tower’s garrison which, four years later and in anticipation of a Turkish incursion, was upgraded to a total of 30 soldiers. The same number of men were stationed there during the emergency of 1645 but this was doubled to sixty in 1722.

Above, view of the internal partitioning within the upper vault of the tower. The method of construction seems to suggest that this was a very late development, probably dating to the time when the tower was used as a prison during the uprising against the French in 1798-1800.

Comino tower played no part in the defence of the Maltese islands during the French invasion of 1798. The structure, however, was to see service as a prison for French sympathizers during the insurrection and blockade of the French by the Anglo-Maltese forces in the years 1798-1800. As a result, Comino tower’s interior was slightly modified and partitioned into a number of rooms to serve as prison cells.

Comino Tower was restored by Din L-Art Helwa in 2002-4, and is open to the public on a number of days during the week. For further information on visiting times please go to the Din l-Art Helwa website at http://www.dinlarthelwa.org/content/view/54/55/.