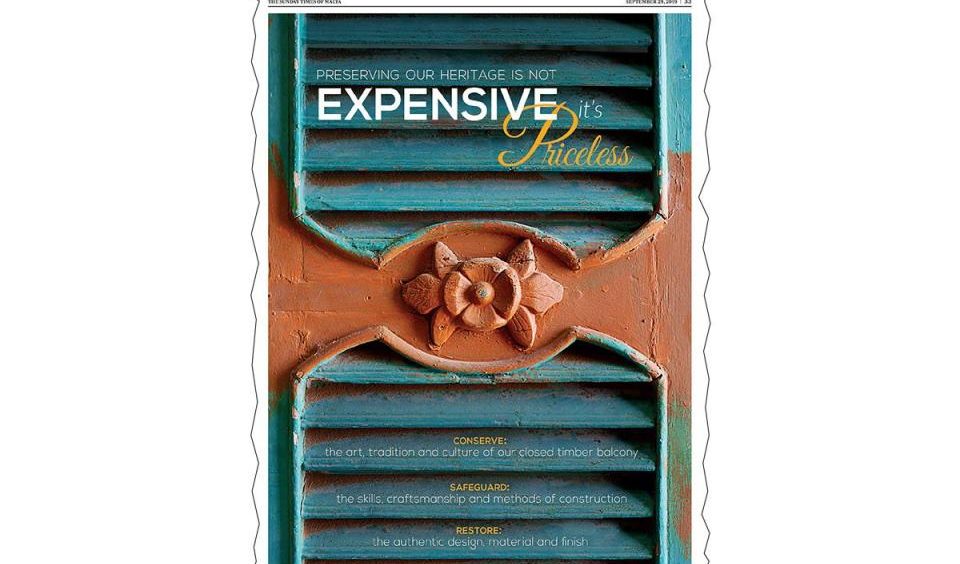 The Sunday Times of Malta (September 29) carried a full page advert from the Planning Authority (PA) with an attractive image of a patinated timber louvered panelled door and the headline message: “Preserving our Heritage is not expensive: it’s Priceless”. 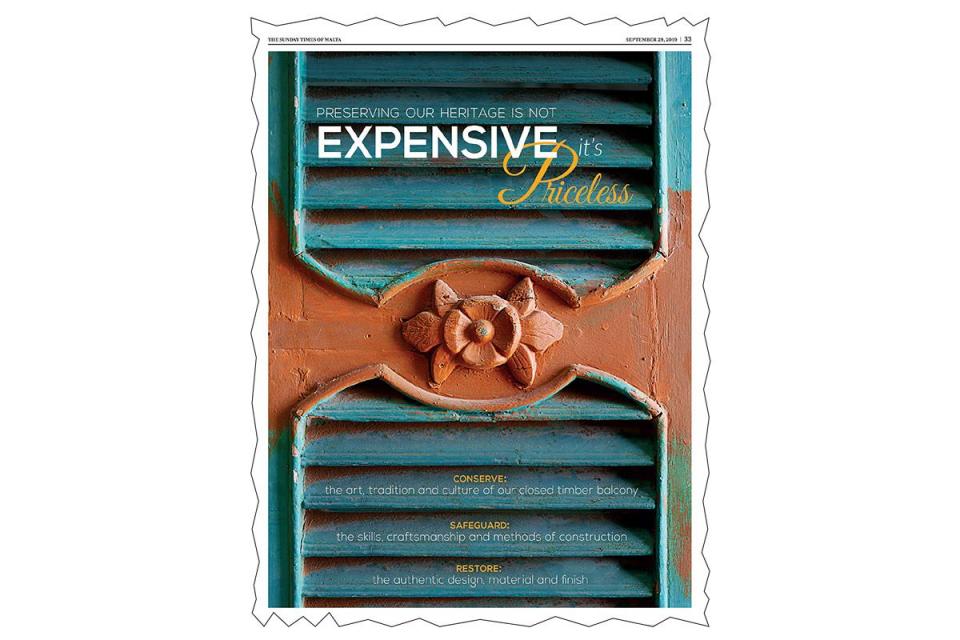 Rather interesting to see the Planning Authority marketing itself as respecting Malta’s heritage. Truth be told, I personally know many people within the structure at the Planning Authority who indeed care for our heritage. People who encourage us at Din l-Art Ħelwa to write objections and to give the PA’s Directorate information and encouragement on how to preserve buildings. These are people who are exasperated and gravely concerned about the number of buildings receiving permits for demolition or mutiliation mainly by way of token retention of the facade.

It is therefore going to take more than a full page advert in The Sunday Times for us to believe that there is a serious change from this destruction and mutilation of our built cultural heritage.

On September 17, Simone Vella Lenicker, the president of the Kamra tal-Periti, wrote an article in the Times of Malta as to why the Chamber did not participate in the public event “Iż-Żejjed kollu Żejjed (“Enough is enough”) held on September 7. This event was organised by Graffitti and was supported by more than 60 NGOs and many members of the public.

In that heartfelt apology on behalf of architects who act without a conscience, Vella Lenicker used the example of a current application of 12-metre high industrial buildings right next door to the Grade 1 scheduled Ottoman-Muslim cemetery in Marsa, designed by Emanuele Luigi Galizia, as an example of the current shocking, insensitive planning applications. The problem is there will always be the one architect who thinks an application like this is fine, and a developer who wants to maximise on the profit of a site. We’re often not talking about thousands of euros in profits, but millions.

It is robust policy and legislation that should prevent such rogues from being able to apply and obtain permits that destroy or mutilate our heritage. Anything else – in the words of Conrad Thake, with respect to this application adjacent to the Ottoman-Muslim cemetery – “is barbaric”.

It seems grossly hypocritical to us, as citizens of these islands we hold dear, that an agency places adverts in the paper that directly promote protection and preservation, and yet the same agency approves applications that destroy our nation’s heritage. And by destroy, I don’t exclusively refer to demolition, although that is happening too. Protection of the heritage also requires protection of its context, protection from the building of blocks of apartments that overlook – or often even worse still – present massive bulk and blank party walls to properties in the immediate vicinity.

On August 21, Alex Torpiano wrote a Talking Point titled “How to replace two protected houses (Scheduled Grade 2) with a nine-storey block”. The cited case on the waterfront of Balluta is an accurate and all too common example of how established planning policies and legislation are twisted and misinterpreted in order to push a permit through. The result is awful, with a scheduled grade 2 building and its context having been destroyed. The development is utterly discordant with the urban conservation area in which it falls and has inflicted a major scar on Balluta waterfront. It is indeed barbaric!

We need the Planning Authority and its planning boards to issue a clarification on automatic protection of scheduled buildings, historic buildings, urban conservation zones and their contexts

Sadly, the Balluta waterfont is far from being the only such shocking example: these past 12 months alone have seen numerous instances of applications being submitted – and several being approved – that defy planning policies. Recent examples in Malta and Gozo include five storeys next to the recently scheduled Grade 1 The Olives, Tarxien, the scheduled Villa Icilio in Triq Annibale Preca Street, Lija, a vernacular house in the heart of Żebbuġ, Gozo, Villa St Ignatius Sliema, Vjal San Wistin, Rabat and numerous other examples of historical buildings which are destroyed either through demolition, partial demolition, token facadism or unsightly mutilation of the context.

So what can the Planning Authority do to improve this sorry situation?

For a start, the Planning Authority and its boards can throw out applications that ruin the context of scheduled buildings and urban conservation areas since current planning policies reference context and implied buffer zones. Hats off to the Superintendence of Cultural Heritage which urges the refusal of an apartment block in the immediate vicinity of Villa Barbaro, Tarxien and has advised for a buffer zone “to protect its visual integrity”.

The Development and Control Design Policy 2015 (DC 15) is an excellent document written by very capable individuals. It is a policy document which prioritises ‘context’; its overall arching vision as stated in its Document Vision addresses protection of streetscape, protection of context:

“Our urban environment cannot afford to have a low-quality built fabric – a fabric that produces bland, repetitive blocks that are discordant with the older components of the street and, in the worst cases, kill the spirit of our streets due to the negative impact that is created in visual, social and environmental terms; a fabric characterised by dead facades, blank walls and exposed services that scar our townscapes, streetscapes and skylines.”

DC 15 goes on to reference transition zones between UCA’s and development zones, between two floor villa areas and apartment block areas with a clear emphasis on the protection of heritage.

The Strategic Plan for the Environment and Development (SPED) which replaced the Structure Plan also defines overarching themes that speak to the protection of heritage, identity and distinctiveness:

“Urban Objective 2: To improve the townscape and environment in historic cores and their setting with a presumption against demolition of property worthy of conservation by… Adopting a context driven approach to the control of building heights within urban conservation areas… Development within historic sites is to be carried out in such a manner so as to ensure that the historic sites’ skyline is not adversely affected.”

The SPED also refers to a specific clause related to scheduled buildings which states, “Demolition or alterations which impair the setting or change the external or internal appearance, including anything contained within the curtilage of the building, will not be allowed.”

So in reality it is very simple indeed: we need the Planning Authority and its planning boards to issue a clarification on automatic protection of scheduled buildings, historic buildings, urban conservation zones and their contexts. This clarification will need to be adhered to by the directorate and the boards. After all, such direction is already enshrined in the existing planning policies. In doing so the Planning Authority will give our built cultural heritage the protection it needs in terms of controlling the context with proper buffer zones, because indeed: “Preserving our heritage is not expensive: it’s priceless”.