Din l-Art Helwa has received a letter from Dr Robert Abela as lawyer for MEPA CEO Mr Johann Buttigieg wherein the NGO has been asked to apologise and withdraw a statement it issued last week.

Making reference to a report on illegal development at San Blas Bay published  on the front page by the Sunday Independent of 29th June, the NGO held  that, “Furthermore, it should be self-evident that the chief executive officer of a regulating authority and officials should not have financial interests in the sector which they are involved in regulating.  From yesterday’s report, it appears that MEPA’s CEO has been directly involved in extensive property development”.

In the legal letter to the NGO, Dr Abela said that unless Din l-Art Helwa withdraw the statement and apologise within two days then his client will proceed to take action against the NGO and its council.

Din l-Art Helwa’s statement referred to the report in the Sunday Independent wherein it was reported that the wife of Mr Johann Buttigieg was a shareholder of various companies that were involved in property development. In its statement, DLH called on the MEPA chairman “to confirm to the public whether this is the case or not, as any uncertainty on this matter will only serve to further erode public trust in the Planning Authority.”

MEPA’s own Code of Ethics states that its employees “shall avoid any financial or other interest or undertaking that could directly or indirectly compromise the performance of their duties.” The code also emphasises the importance of transparency because owning or having “interests in property that may be affected by planning and land management decisions” presents “a real potential for conflict of interest.”

DLH has not received any communication from MEPA to date on this matter, however it has now been reported in the press  that, following a meeting with the CEO,  the MEPA Board stated that Mr Buttigieg had confirmed that the two companies in which his wife was involved, Ta’ Pinu Developments Ltd and Zebbiegh Developments Ltd, had been closed down some time before Mr Buttigieg was appointed CEO of MEPA, and that she was still a shareholder in MMB Ltd which had not acquired further property since 2008.

Din l-Art Helwa accepts the conclusion of the MEPA Board that Mr Buttigieg has no conflicts of interest with respect to property development and his role as chief executive officer of the Planning Authority. 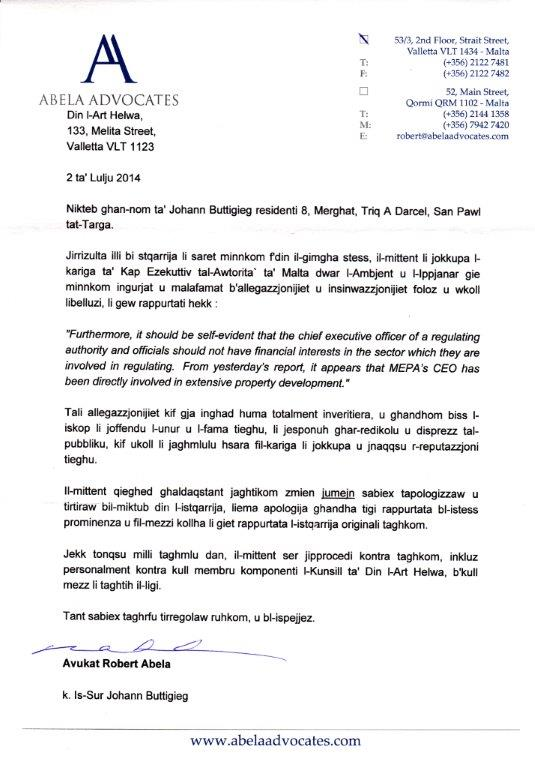