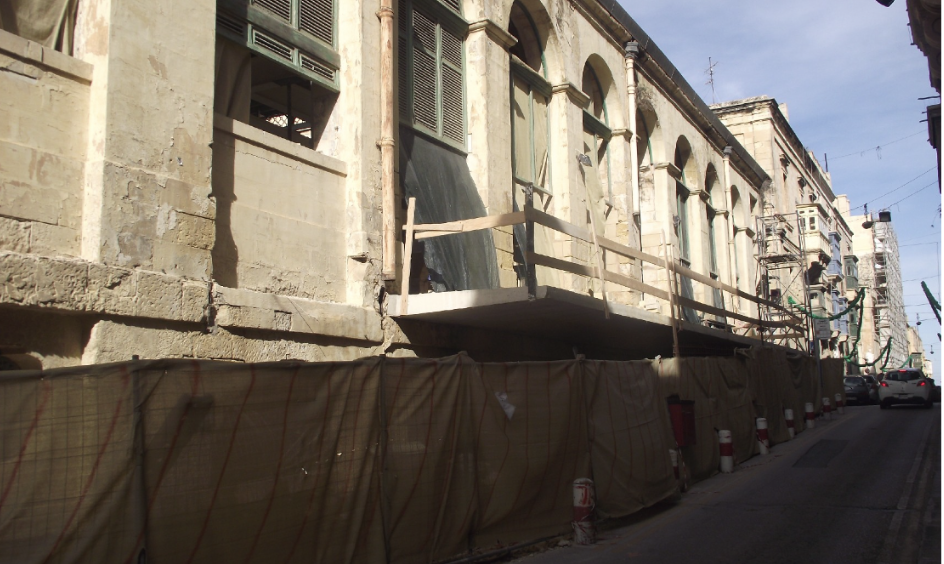 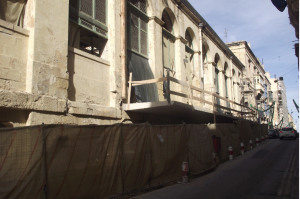 Unauthorised works have been carried out on the unique historic structure of the Valletta Covered Market, a Grade 1 Scheduled building in the centre of the city.

A cantilevered concrete balcony has been constructed projecting onto Saint Paul Street, severely impacting the aesthetic and architectural values of both the building and the fine aesthetics of St Paul Street. These works seem to have been carried out without Planning Authority authorisation.

The construction of this projection forms part of the scope of Planning Application PA 03215/16. The non-executable decision notice regarding this permit was only published on 8 February 2017, which means that no works may be executed under this permit until a 4-week appeals period has expired. Works on the projecting concrete balcony appear to have been conducted illegally, probably even before the appeals period had even commenced.

Din l-Art Helwa is very concerned by the piecemeal manner in which planning permission for this intervention has been sought. The project appears to be covered by two separate planning applications. PA 02370/15 was approved last year. In 2016, a new application was lodged for permission for a number of components of the same project. The period for representations by the public on this second application expired on 19 September 2016. The drawings showing the projecting concrete balcony on Saint Paul Street were however only submitted in October 2016, after the public consultation period had expired, meaning that the proposal received much less scrutiny. To add insult to injury, it appears that works on this projecting concrete balcony were undertaken even before these works were authorised. Although the works have taken place in full public view, no enforcement action appears to have been taken to date.

This projecting cantilever is aesthetically a disastrous addition to the back elevation. It projects significantly into St Paul Street at a low level creating a hazard for vehicles. It also impacts the fine aesthetics of St Paul’s church which was designed with gentle protruding mouldings to capture the shadows created by the sun when it permeates this street. Adding a cantilever to the back of the unique market building designed by Hector Zimelli and Emanuele Luigi Galizia between 1859 and 1861, eliminates the access from St Paul Street and illustrates the lack of sensitivity and understanding of how this building interacted with it.

Such manoeuvres are making a mockery of the planning process, and subvert the letter and the spirit of Malta’s planning legislation. This is even graver when such a slipshod and cavalier approach is witnessed on a major Grade 1 historic building, which also happens to be public property, and which has been severely impacted as a result. Din l-Art Helwa has reported the illegal works to the authorities, and is calling on Government to act decisively to show that such abuse will not be tolerated.