Restoration and Conservation of the painting of the Holy Virgin and Child, bearing the Guttenberg coat of arms.

A canvas painting representing the Holy Virgin with Child, the infant Jesus is depicted looking towards the viewer, while the Virgin has a serene gaze, as if in contemplation, looking slightly away from the viewer. The painting has now been restored by Amy Sciberras, Din l-Art Ħelwa’s resident conservator and is exhibited at the Church of Our Lady of Victory in Valletta. 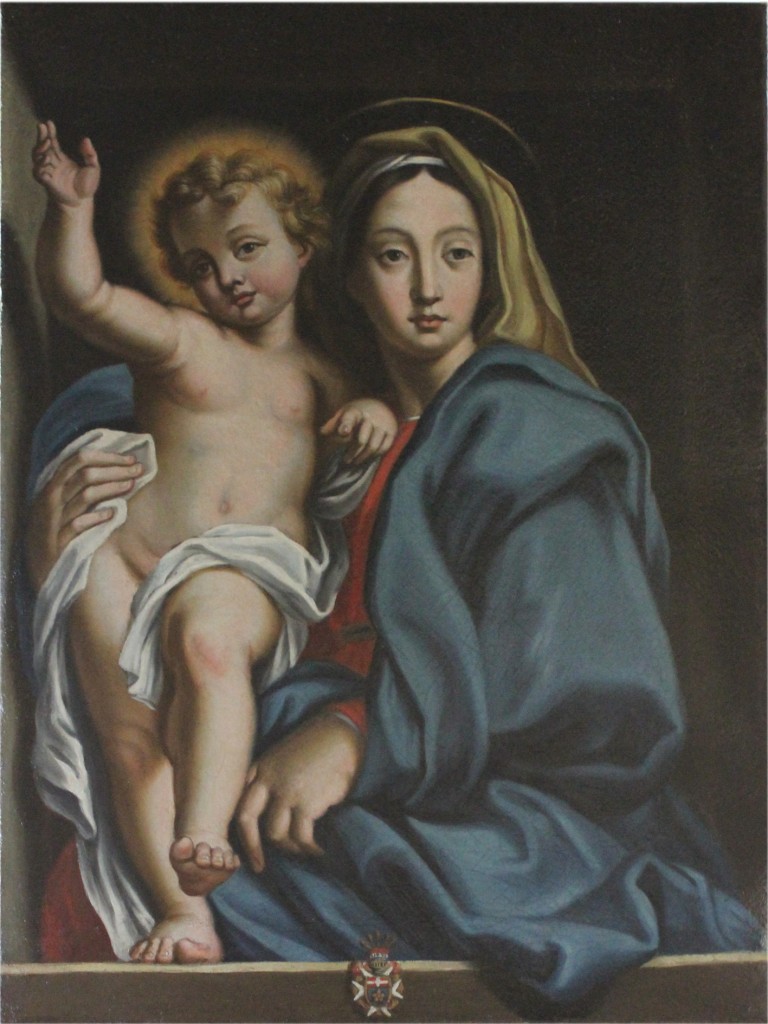 Fra Wolfgang Philippus von Guttenberg (1647-1733) whose coat of arms of is depicted beneath the Holy Virgin and Child is most probably the donor of the painting which was executed between the late 17th century and early 18th century. It is a copy after Carlo Maratta (1625-1713) of the original painting found at the Pinacoteca Vaticana.

Fra Wolfgang Philippus von Guttenberg was Bailiff of Brandenburg and a notable dignitary of the Order of St. John who lived in Malta for sixty-three years and contributed to several landmarks in Malta.[1] In fact, a small mezzo-busto portrait of this great benefactor of the order, still hangs within the sacristy of Our Lady of Victory Church, over its dedicatory plaque.

The painting of the Holy Virgin and Child was in a very poor condition and examinations revealed that it was also subjected to amateurish forms of restoration. 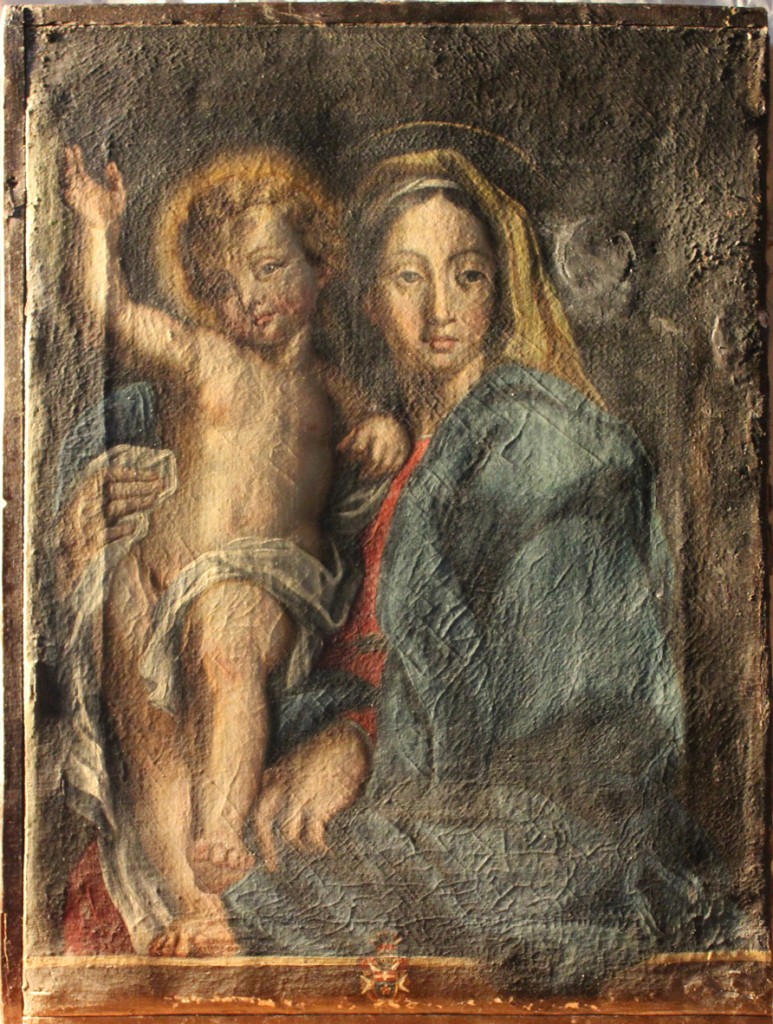 Preliminary analysis using non-invasive techniques such as raking light, ultraviolet florescence and infra-red reflectography,[1] helped in gaining a better understanding of the manufacturing technique and state of conservation. 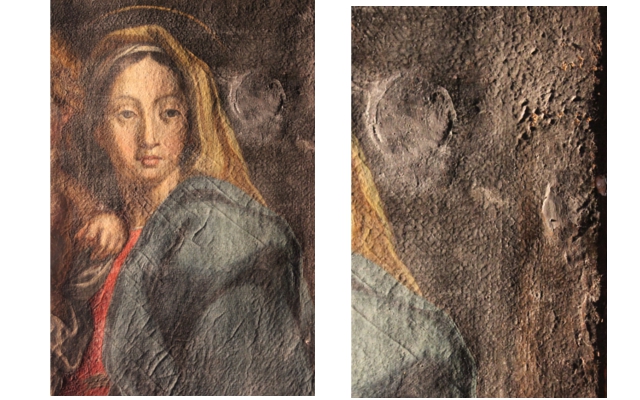 The strainer, onto which the oil-painted canvas was stretched, was structurally unstable, exhibiting open joints and fractures. Insect flight holes in the strainer indicated that this had also suffered from insect attack, whilst dust accumulation filled the space between the strainer support and the stretched canvas, causing some deformations along the lower area of the painting. Further deformations  of the canvas corresponded to the side members of the strainer and to the lower open joint of the strainer at right hand corner. 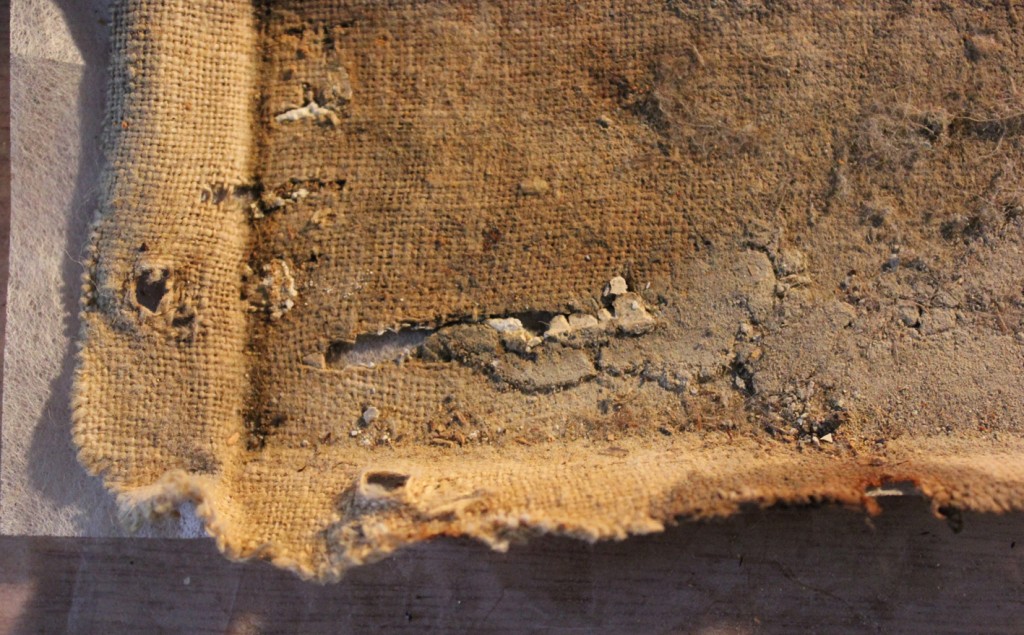 With regard to the ground and paint layers, these exhibited various signs of deterioration including lacunae, craquelure, cupping, lifted paint, retouched infills and flaking paint. Cupping and liftings of the paint layer also indicated lack of adhesion between the various strata constituting the painting i.e. betweenthe paint layer, ground layer/s and canvas support. 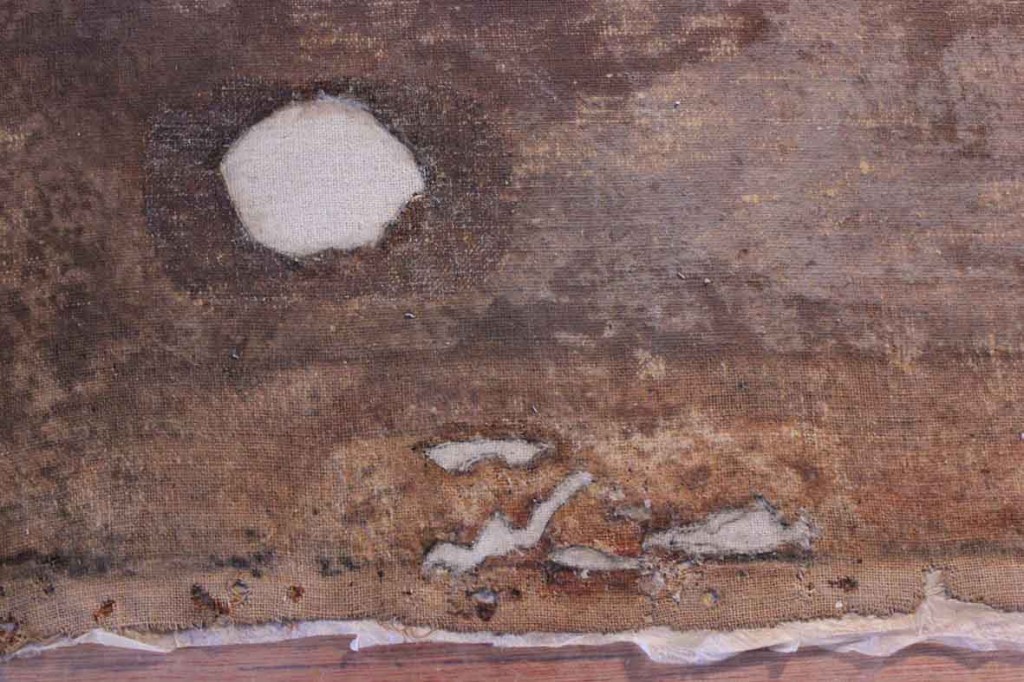 Various retouchings which were barely visible to the naked eye, were very evident (seen as dark patches) under ultraviolet flourescence.

The canvas painting was dismantled from its strainer and dust, grime and encrustations were cleaned off the canvas’ verso.

The duct tape patch covering the roughly stuccoed lacuna in the canvas support as well as  the textile patches were removed. Exposed old infills were mechanically removed as well. During this treatment, old stucco was found covering some areas of the original paint layer and was hence removed, thus uncovering more of the original background.

Furthermore, subsequent to this treatment, liftings and cupping of the paint layer were improved by the application of moisture, heat and pressure. This helped not only in improving the surface of the paint layer, including deformations, but also in reinstating adhesion to the lifted paint. 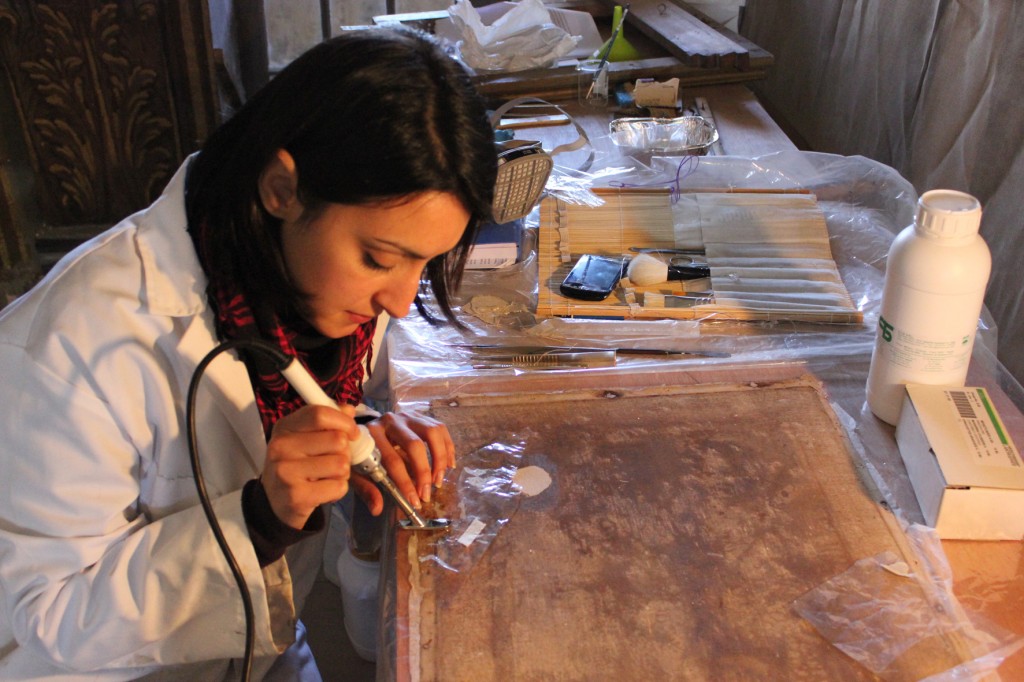 Even though lacunae were inlayed and the surface was improved, however due to the original canvas being fairly oxidised, weak, rigid and having deteriorated tacking margins as well as exhibiting lack of adhesion between the various strata, relining was considered to be the best option. Relining involves the attachment of a new canvas support, to the verso of the original deteriorated canvas, using a suitable adhesive in order to reinforce the original support as well as improve the adhesion between the preparatory / paint layers and the original canvas.

Once the painting was relined, the next step was that of restretching it. Since its original strainer was too deteriorated to be used again, a new auxiliary support i.e. a stretcher frame, was manufactured.

At this point, the paint and preparatory layers were well adhered to each other and to the canvas support. Thus it was safe to proceed with cleaning of the oxidised varnish layer which was obscuring the the paint layer. 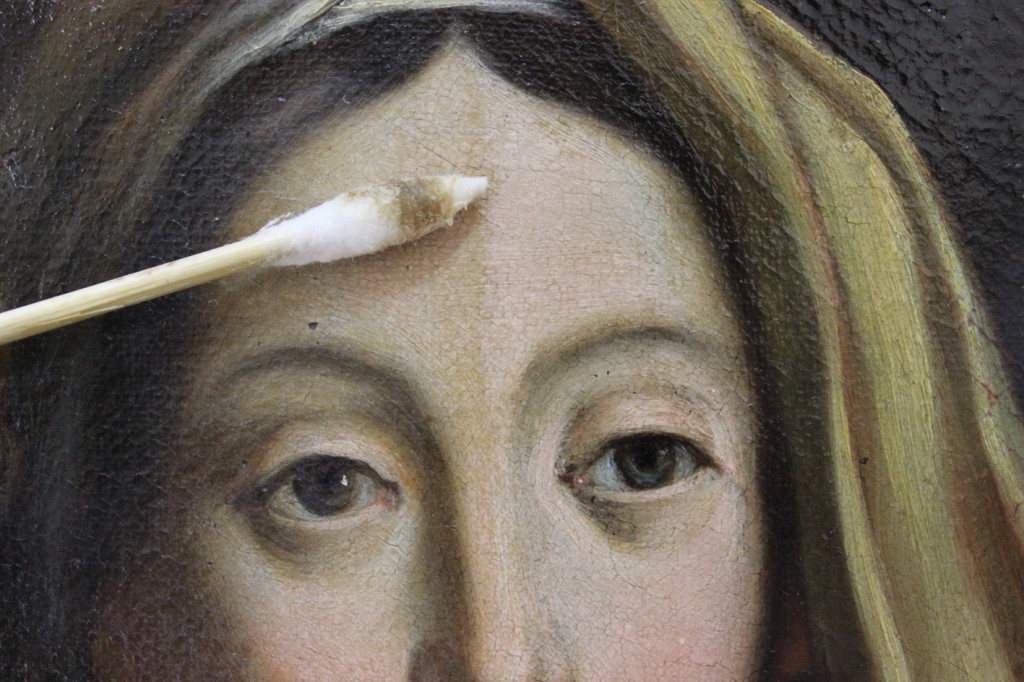 Lacunae in the paint layer were then infilled using gesso. These were levelled and textured, imitating the painting’s surface.

An intermediate layer of varnish was subsequently applied to the paint surface and major infills were integrated using the tratteggio spezzato technique and reversible varnish colours. 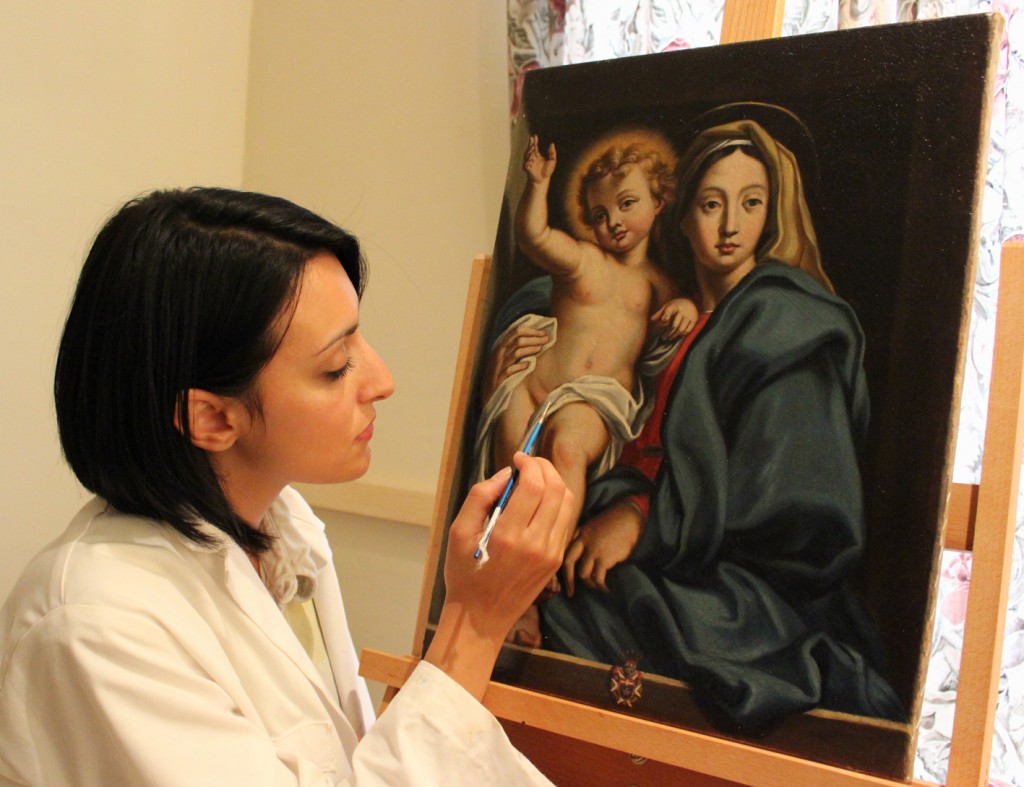 Finally, a thin, synthetic and reversible protective coating of varnish was applied

[1]Infra-red reflectography is a non-invasive technique which gives the possibility of revealing various information, including underdrawings and pentimentiin paintings.