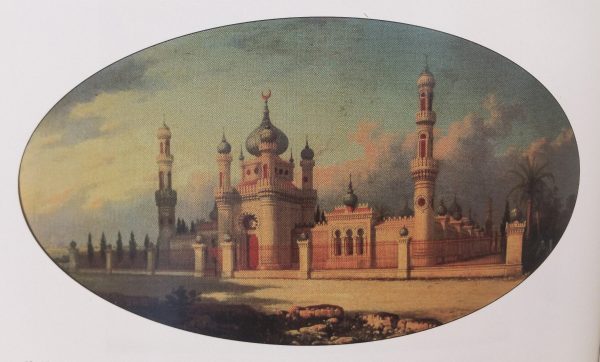 The Ottoman Muslim cemetery in Marsa, better known as the ‘Turkish cemetery’ was completed in 1874. It is a rare example of Orientalist architecture built by a Maltese architect, in what was then a British colony. It resembles a traditional, quiet Mediterranean garden, providing trees and shade and protected by high walls from the hot and dusty world outside.

We are all too familiar with the fate of many of Malta’s traditional gardens. One by one, they are being demolished and replaced with buildings. Like Medusa, contemporary Maltese developers and architects turn everything that falls under their gaze into stone.

The architect of this lovely cemetery was Emanuele Luigi Galizia (1830-1907), one of Malta’s most successful architects of his generation. His reputation among Maltese architects is such that the Kamra tal-Periti (Chamber of Architects) have dedicated their annual architectural award to his name.

The environmental protest held on September 7 has not made a dent in the government’s hard stance on the environment. Energy and money continues to flow into road building to cater for the burgeoning traffic.

One of its current priorities is supporting the construction lobby by finding immediate solutions for demolition and excavation waste. The government does not want construction to slow down.

Yet the protest triggered other interesting outcomes. One of these is the response by the Chamber of Architects. While the organisers of the protest intentionally excluded politicians and political groups, they did invite the chamber to join in.

Yet the chamber decided not to attend. It noted that the architectural profession must shoulder some blame for the growing ugliness of our streets, and that the chamber’s presence would therefore be “nothing short of hypocritical”.

This is a brave and important stance. It reveals admirable priorities and concerns, and should not be taken for granted. The Chamber merits support.

Over the years, the chamber has lobbied for better policies and good governance, and against some bad planning decisions. They have written papers pushing against the planning rot. Architects depend on construction to earn a living, but they are certainly not all just out to make a quick buck.

Many of the chamber’s members are talented and try their best. Some do manage to produce good buildings, even in this environmental disaster, and which deserve to be recognised as such.

As in any organisation, the chamber has ebbed and flowed over the years, but overall it can look back with some satisfaction over its achievements too.

The chamber represents architects but of course it cannot take full blame for the actions of the individual members of the profession. But unfortunately they are absolutely right that there is ugliness all around, and that architects cannot shrug that off as somebody else’s disaster. Architecture is part of it.

As I have said elsewhere, it is not the quantity but the quality of our buildings which creates the problem. And even if decent buildings do emerge from the rubble, the streets around them are sure to be of low quality and will bring them down.

As an example of an insensitive project by contemporary architects, in this newspaper chamber president Simone Vella Lenicker recently mentioned a proposed 12-metre high industrial building right beside the Turkish cemetery. If approved this would be next door to Galizia’s Orientalist architectural gem, which is protected under Grade 1 scheduling rules.

This kind of proposal shows no respect for Malta’s built cultural heritage and makes a mockery of scheduling. But it is not an isolated case. Grade 2 scheduling is a lower level, but still assumes that protection is merited.

Yet, the new, monstrous development in St Julian’s bay, which literally hangs over the sea near Balluta, is replacing a building which was scheduled at Grade 2.

Only part of its façade on the main street has been retained, despite the back of this building being even more widely visible than the front. Perhaps the Planning Authority imagined that nobody would see the outsized development from the bay. Can this aberration be considered as high quality planning or architecture?

In any case, God knows how anyone will manage to live or work comfortably on its lower floors when strong winds and waves pick up there in winter, as they surely will.

Bad planning policies are an additional problem. The fuel stations policy is one of many, but relevant here as another recent threat to the Turkish cemetery was an application for the construction of a new petrol station close to it. This has not yet been granted so far, but never say never with the PA.

Unfortunately, while all professions have their good and bad, in the case of architects the whole community has to see and live with their mistakes every day.

We admire Galizia’s work because it gives pleasure to look at his buildings. They enhance our built environment, and do not inflict scars on the landscape.

Soon after completing the Turkish cemetery, Galizia built three terraced houses along Rudolph Street in Sliema, called ‘Alhambra’, ‘Pax’ and ‘Alcazar’. At the time, this corner of Sliema was still relatively rural, with fields and rubble walls around. Yet to this day, these three houses enhance the streetscape, now dwarfed among surrounding newer development.

These three houses were personal projects, but like any other architect Galizia generally worked with clients and restrictions, yet he still managed to produce beautiful results. It is too easy to blame the client or planning rules nowadays.

Smaller budgets do not excuse ugly designs either. And our disappointing streetscapes have nothing to do with the aesthetics of ‘houses versus flats’. Apartments are fine, and can look good too. In this tiny country it is anyway not environmentally feasible for each family to live in a spacious house with garden.

Besides the broken, narrow pavements – for which fingers can be pointed at local councils –Malta’s streets are undermined by new buildings constructed with no consideration for context. Blocks are also designed without planned spaces for garbage collection, which then litters the streets. Air-conditioning units and water tanks are likewise ignored in plans, and clutter balconies and roofs. Here, sadly, architects must indeed shoulder blame.

The question remains: why do too many Maltese architects work like this?

Does a legalistic approach take precedence over design? Ticking the policy boxes without imagination, or attention to context and detail? Some prominent architects appear to prioritise the skill of navigating the system. Kudos is given to getting permits, not to quality design.

The Chamber of Architects is striving to turn the tide, but it fights an uphill, tough battle. The mercenary architects out there are not only letting down their colleagues, but all of us. The damage they are doing, or condoning, is lasting.

All members of this important profession must get on board and raise their game. The whole of Malta, including future generations, will surely be grateful.