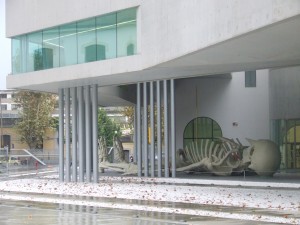 The German-born British architectural historian, Nikolaus Pevsner once famously stated that “A bicycle shed is a building; Lincoln Cathedral is a piece of architecture.”  His distinction between what constitutes a mere building (presumably not involving the services of an architect) from architecture was that “anything that encloses space on a scale sufficient for a human being to move in is a building”, whereas the term “architecture applies only to buildings designed with a view to aesthetic appeal.”

Now, Pevsner’s clinical differentiation of architecture and building has long since been discarded and rendered obsolete, as architectural history and criticism have evolved along more multi-cultural, inter-disciplinary and egalitarian lines. It is no longer fashionable and ‘politically-correct’ to differentiate between building construction and architecture. Even our own Faculty of Architecture and Civil Engineering at the University has been re-named as the Faculty for the Built Environment to reflect the interdisciplinary and multi-faceted nature of ‘architecture’.

Now I confess to the sin of a being rather nostalgic by subscribing to the heroic (and idealistic — again not a fashionable term this days) concept that an architect has, in his or her own way the potential (even on an infinitesimal scale) to improve the state of our environment and quality of our lives. Now that might sound like an inflated and bombastic claim, but then again why should we not aspire to be driven by grand humanistic ideals rather than succumbing to overwhelming urges to make money (now that is fashionable).

For the past decade Malta has been like a building site perpetually on heat —- an army of overhead tower cranes, concrete mixers, and boarded-up scaffolding. Lots of construction translated into buildings, but can one equate the lot with architecture. I seriously doubt it. I would say only a very small percentage (would venture to say less than 1%)  of all new buildings would qualify as being truly deserving of the appellative ‘architecture’ where to borrow Pevsner’s outdated phrase buildings are ‘designed with a view to aesthetic appeal.’

Like architecture, aesthetics have become a very expendable and disposable term — everybody seems perfectly qualified at professing to have a refined sense of aesthetics, so who the heck needs an architect to ‘design a building.’ I very much suspect that in the developers’ mindset the true value and worth of an architect is today based only on two criteria – the architect’s ability to maximize monetary value from every one square centimeter of the site and his/her ability and dexterity to successfully navigate the bureaucratic planning development maze in the shortest possible time. All the rest, as they say is superfluous icing on the cake.

I very much fear than architecture has today become not much more than an exquisite corpse whilst all around us, we have (in the name of progress) willingly embraced unbridled building.