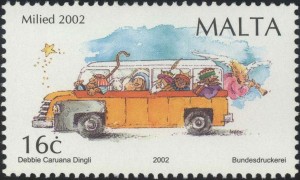 In all the mud-slinging about the change of bus operators being led by the Minister of Transport, one of the environmental reasons for the bus reform in July 2011 is now rarely mentioned and seems to be taken for granted. This was to reduce air pollution on the roads by getting rid of the old buses and the thick black smoke that puffed and belched out of their exhaust pipes as they drove through our congested streets.

The idea was also to encourage more commuters to use public transport through a higher standard and cleaner service. Fewer cars on the road means less air pollution. The transport sector is the highest contributor to air pollution in Malta.

Reforming the bus service was one of the measures laid out in the national Air Quality plan of 2010. The plan is full of ideas on how to improve air quality, mainly focused on road transport. This includes CVA systems and low emission zones to reduce traffic in certain areas, VRT and car scrappage schemes to encourage newer, cleaner vehicles, and much more.

It would be good to have an overall update on how many of the recommended transport measures have already been implemented, and which have encountered problems for one reason or another.

Recent decisions include a reduction in the hours when the CVA system in Valletta operates. How has this affected traffic movement in Valletta, and how does it fit in with the aim to reduce traffic in historic urban centres?

On the other hand, park-and-ride fees at Floriana have been slashed from €1.50 to €0.40 since the recent exit of Arriva, with a predicted increase in use of this facility. That’s fine, assuming that these prices are sustainable.

Now we are told that the Environment Minister intends to draft a new air quality plan eventually, once the MEPA ‘demerger’ takes place. I can understand a move to draft specific plans targeting congested areas such as Msida, but the existing national air quality plan merits a mention. It is not yet a dead document, nor is it a former leader’s statue toppled by the crowds. The same competent public officials who were responsible for this plan will probably also influence the next one, and many of the proposed solutions are likely to be similar.

An official announcement saying that the drafting of a new air quality plan will commence one day, without presenting what is being done on the ground through measures that are already well identified, sounds a bit feeble.