Such policies are literally paving the way for more concrete pathways in the countryside: 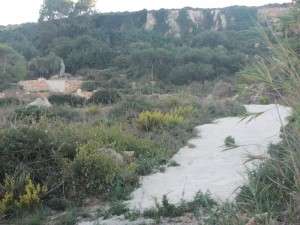 This is the second article in a short series which draws the limelight on the implications of the proposed amendments to ODZ policies.

The coastal aspect of ODZ is conspicuous by its absence within Policy 1.2H, which refers to country pathways. The mind boggles as to why the coastline and sensitive issues such as public access to the foreshore are completely overlooked within such a policy.

But possibly the most preposterous of all proposals are those in Part 2, referring to farm dwellings and agricultural buildings. For instance, policy 2.2A makes references to all livestock farmers, not only cattle and pig breeders but also to poultry and rabbit farmers, who will be eligible to apply for permission for the construction of a single dwelling/residential unit within ODZ areas despite the fact that poultry and rabbit farmers DON’T need to reside on site for animal husbandry purposes. Such a proposal will thus lead to rampant abuse, especially since poultry farms can be easily managed with very limited resources, thus undermining any justification which this policy tries to give for permitting new ODZ residences. The same proposal provides scope for further soil take-up by stating that ‘A separate entrance to the dwelling may be permitted.’

But the cherry on the cake is yet to come. In fact, the same policy affirms that ‘Permission may be granted for the construction of a single dwelling unit outside the boundary of an operational livestock farm but within a distance of not more than 100m from the boundary of the farm, provided that…..the proposed site is not located within a scheduled Class A or Class B Area/Site of Archaeological Importance and/or Level 1 or Level 2 Area of Ecological Importance/Site of Scientific Importance…and the proposed building has a maximum floor space of 150m2.’ Why is a leeway of 100m being granted? Will the livestock farmer be able to hear his animals from such a distance? Why shouldn’t the permitted new constructions RIGHT NEXT to the livestock farm? This will simply lead to more concrete paths in the countryside as farmers will want to pave the distance of 100m to their farms. And what about other protected areas, such as SAC’s, Areas of High Landscape Value, etc? Why have these been omitted? And why is it that no other constraints have been placed on applicants, such as number of floors, absence of a washroom and swimming pools and private gardens, the need for landscaping, etc, etc?

In summary, the weakest links in the proposed policies is that there is little or no cross-referencing to EU Directives/obligations (for instance, Special Areas of Conservation are not even deigned a mention). The same policies place the onus on the discretion of the Agricultural and Veterinary departments, whereby the Environment Directorate should play a more prominent role since we are dealing with ODZ areas. Building heights are not specified whilst ‘as long as they (permitted constructions) respect the rural character’ is too vague a term which is simply an invitation for abuse.