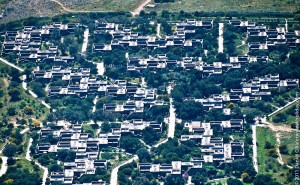 Architect Hans Munk Hansen (1929-) is not a household name not even in local architectural circles. Yet he has bequeathed us with one of the most well-designed and pleasant tourist complexes to be built in Malta – and I would venture to say by far the best in terms of architectural quality. The Mellieha Holiday Centre also known as the Danish Village was conceived in the late 1970s. It is composed of clusters of one-storey bungalows planned around a private open courtyard, built of local limestone and typologically inspired by the local razzett or farmhouse. I recall an architect friend of mine recounting how Hans Munk Hansen had spent an entire month visiting and studying Maltese vernacular architecture prior to putting pencil to paper and embarking on the design of the tourist complex. It was time well invested as the end product is one of the finest examples of so-called critical regionalist architecture, where there is a healthy synergy between modernity and local vernacular architecture.

The bungalows are grouped in clusters and planned in the form of our local traditional villages laid out along informal pedestrian footpaths. The operators Dansk Folke-Ferie invested considerably in landscaping and eco-friendly measures, reaping dividends over the long term. Although they were building on a highly sensitive site, the developers and their architect demonstrated sensitivity in ensuring that both the scale and the nature of the built  environment would be in harmony with its surroundings. That requires a high dose of skill, sensitivity and humility – qualities that are conspicuously absent in the present-day discourse between architects, developers and planners.

Fast forward thirty years, and consider the kind of developments we have embraced and given the seal of approval today. We have promoted the construction of five-star hotels replete with kitsch architecture and décor, that could be anywhere in the world, bearing absolutely no relationship to our local architectural heritage or landscape. Even more disconcerting are recent developments such as the Mistra residential project which at dizzying heights ranging from thirty to forty metres, looming over the ridge should in due course earn it the infamous appellative of the ‘Great Wall of Mistra’.

Hans Munk Hansen, now in his eighties and the recipient of several architectural awards including the prestigious Europa Nostra award for his restoration projects, would not have been a popular choice of architect for local developers. Mega-scale high-density, high-rise projects were never part of his architectural creed. Such an unbridled exploitation of our landscape would have been totally anathema to his principles.

I fear that this valuable lesson from Denmark is all but forgotten, consigned to oblivion and at best viewed with a skewed sense of nostalgia. For now Singapore, Shanghai, Taipei beckon……