Of citizenship and the coastline: outright, shackle-free sale is always WRONG 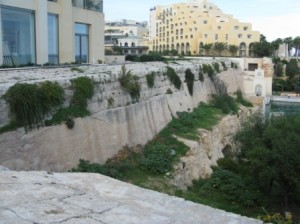 A veritable brouhaha has been kicked up, and rightly so, about the indiscriminate sale of the Maltese citizenship. Concomitantly, however, it’s just the usual suspects (i.e. environmental NGOs) who flag the unremitting sale of our coastline. From Ta’ Cenc to Portomaso, the encroachment is relentless. The following blog has been updated from a piece published in The Sunday Times over five years ago about the Portomaso case and which is still very valid today:

In October 2008, project application PA 04096/08 was published, proposing the construction of 60 apartments, a parking area, natural sea water swimming pool and a roof garden at Portomaso. The site in question is uncommitted land which was originally identified as having conservation value in the Structure Plan but which was re-zoned for development in the North Harbours Local Plan. The application sent shivers down many spines and evoked unsavoury memories of the original project that redeveloped the Hilton into Portomaso.

The two most controversial issues regarding the proposed Portomaso extension relate to the safeguarding of the ecological zones identified at the site and a question regarding which regulatory plan is applicable to the project.

The environmental impact assessment (EIA) report compiled for the original development at Portomaso (PA 01270/95) had said: ‘It is recommended that buffer zones, as large as possible, should be left around the sensitive areas, particularly the ecological zones….; no development should be allowed near the buffers and activities should be limited to walking near designated footpaths’.

Furthermore, the EIA made a telling recommendation: ‘Fencing should be used to deter casual wandering onto sensitive areas and to act as a visual reminder of the presence of features of importance; information boards explaining the importance of the ecological zones should be considered.’

Fencing has been erected around a section of the Hilton redevelopment site along with signs stating: ‘As part of the Hilton site redevelopment project, the site within this wall is being sealed off for the protection of important ecological species during project construction and will be reopened to the public…’

The two protected plant species located at the southern end of the site are the Wedgefoot Grass and the Maltese Sea Chamomile. At the time of the original Hilton development, Wedgefoot Grass was known to grow at only one other locality in Malta, while the Maltese Sea Chamomile is a species endemic to our islands, and thus protected under Schedule 10 of LN 311. Hence, while the protection of the ecological zones appears to have been a defining and pivotal issue 13 years ago, the current application proposes to impinge directly on the same ecological zones. How’s that for a shifting of goalposts!

Ray Fenech, on behalf of the developers, contends that, following several studies, no evidence was ever found that a protected plant species existed on the site and, as a result, the area was identified for development in the local plan.

If the presence of the two protected species is indeed a bygone matter, then this is likely due to a shortcoming on the part of the Hilton developers. In fact, the EIA for the original development states in no uncertain terms that both the northern and the southern ecological zones ‘will be protected by hoardings during construction and by large buffer zones following completion’.

It added: ‘A comprehensive environmental monitoring programme is recommended for both terrestrial and marine ecological sites. This programme should be undertaken both during the construction period and for at least five years thereafter.’ I trust that such prescribed measures did not contemplate the eradication of the two protected plant species along the way.

Besides the recommended protection for the two identified ecological zones, PA 01270/95 was approved with the condition that the entrenchment wall dating back to the times of the Knights would be restored and maintained.

In the 1995 EIA, the then Planning Authority’s Heritage Advisory Committee had recommended that the entrenchment wall should be listed as a Grade I structure. Dennis de Lucca had questioned such a designation on a number of grounds and his arguments prevailed. As a result, the wall on the east side of the site was breached to provide entry into the marina. However, de Lucca had recommended that the wall be extensively restored and regularly maintained. Today, the same entrenchment wall is carpeted with weeds, hardly testifying to any active maintenance of the wall.

The developers’ claim that a distance of six metres would be allowed between the proposed development and the entrenchment cannot mellow the fact that the wall would effectively be hemmed in between two blocks of apartments, thus greatly depreciating its appreciation as a coastal fortification. In their plans, the developers have also been careful to allow public access to the foreshore so as not to draw further criticism. However, if the current project application is given the green light, such access would be quite a long-winded and convoluted affair via a flight of steps.

When outline permission for PA 01270/95 was published, the North Harbours Local Plan, which developers claim is the applicable regulatory plan, was not even approved, let alone published. Hence, the Structure Plan should be considered as the applicable plan at the time. In addition, the current PA 04096/08 project application falls within the boundaries encompassed by permit conditions issued for PA 01270/95. Thus, it is the Structure Plan and not the local plan that should be consulted in deciding the fate of the earmarked area.

In addition, the subsequent approval in 2006 of the North Harbours Local Plan does not make any reference to the commitments entered into by the then Planning Authority in connection with the approved PA 01270/95. These commitments are therefore still valid since the permit conditions linked to PA 01270/95 were not revoked by Mepa. If the Structure Plan is indeed upheld as the plan applicable to the project, the proposed development would be in breach of a number of policies, namely UCO 7, UCO 12, RCO 10, RCO 12, RCO 15, BEN 12, BEN 1 and BEN 2.

In view of the above, the approval of the extension of Portomaso makes a veritable mockery of the original permit conditions and of the recommendations included in the original application EIA for the redevelopment of the Hilton into Portomaso.