Of mutants, nuns and lap-dancers on the Sliema seafront 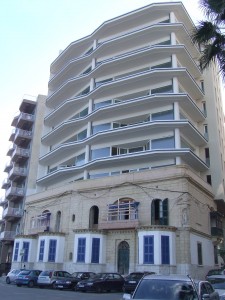 One of the last surviving townhouses on the Sliema seafront has recently mutated into an undefinable combo – the carcass of the surviving two-storey facade with its once quaint bay-windows forcefully fused to, and in the process very much overpowered, by a modern apartment block of over seven floors with jagged zig-zag open balconies and slender concrete columns. The end product is certainly not an edifying spectacle to behold. All sense of picturesque human scale has been irretrievably lost and one would even question whether it was worthwhile in the first place to make such an effort to preserve the original facade whilst belting out that totally incongruous concrete ‘Hulk’ that arises from within.

I am afraid that many a time compromise in architecture is a dirty word leading to sublimally degenerate solutions.  Conserving the facade of the original townhouse is at best an insipid sop to the conservationists whilst still keeping the developer happy with the towering apartment block.  To advocate that after the whole Tower Road seafront was raped and pillaged at will, this townhouse should remain untouched and standing as is, may be asking for the impossible and would fly in the face of natural justice. But then I shudder at the idea that our planners are promoting this concept of hollow facadism on the basis of trying to appease both camps. This is neither serious conservation and is certainly not conducive to an architecture of high aesthetic merit.

The building concoction we are presented with is the equivalent to the unrealistic scenario of  a cloistered monastic nun befriending a lustful lap dancer, conjoined for eternity as Siamese twins.  I am almost tempted to advocate the equivalent of architectural euthanasia and spare the former townhouse its current predicament of perpetual embarrassment.

And then we wonder why architecture in Malta is in the doldrums. Long live the building ‘ghax ir-rota trid idur’.