Political Monuments – of Masterpieces and Pancakes 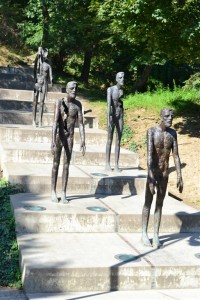 Politicians of all hues and colours make it a point to be not only high visible but at times oppressively omnipresent in our lives. Fair game one might say, as after all we are all political animals of some sort. I was intrigued by the recent public announcement by ‘Heritage Malta’ announcing a competition calling for the design of not one but three monuments for three distinguished political personalities (two former presidents and prime minister). It seems that it is not only the living ones that are competing for our attention but even the departed ones too.

Leaving aside a healthy dose of cynicism that contributes to maintaining one’s sanity, I started ruminating on the quality of the existing political monuments around us. I confess to find most of them cold and uninspiring affairs, ranging from the bland and nondescript to the outright artistically mediocre. How can I be inspired by a monument in the ex-Soviet Social Realist style of an-over decorated wedding cake or the ‘pasturi fil-presepju’ type concoction of puny bronze figures lost amidst a tangle of rugged rubble stones, palm trees and prickly pears – insipid and utterly forgettable. There are a few notable exceptions – the War Memorial in Floriana is dignified and exudes a refined sense of gravitas and I always warm up to Censu Apap’s bronze statue of Pawlu Boffa outside St James Cavalier which captures the subject’s humanity in an informal and unpretentious manner. Otherwise, I scratch my forehead for more masterpieces with the exception of Apap’s and Sciortino’s other monuments.

On a recent visit to Prague, at the foot of Petrin Hill there is a Monument to the Victims of the Communist Regime. It consists of a series of bronze figures of a human figure placed on a series of raised concrete platforms. The first bronze figure on the lower step is wholesome and full, the other figures gradually recede in the background and become representations of a disintegrating human body, until the last figure on the last platform is literally a fragment of the human body. The symbolism of the monument is exceptionally potent to any passer-by, – that the Communist regime with its totalitarian ideology was utterly dehumanizing.

Is it much to ask that our political monuments start engaging us emotionally and intellectually rather than being mere pancakes devoid of substance?