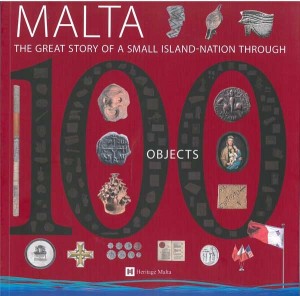 Yesterday I visited Heritage Malta’s exhibition of 100 Objects at the Museum of Archaeology in Valletta. This is a walk through Malta’s history, with a collection of objects lined up as symbols of the events and people of the island’s past. Visitors are channelled through a wooden walkway, with the objects on one side and general short texts about the corresponding historical periods on the other.

Texts aside, the objects are outstanding. Some of them are very well-known such as the Venus figurine from Hagar Qim, or the cippus which provided a key to deciphering the Phoenician script. Others may be less familiar, such as a Roman ossarium from Gozo, a Byzantine figure of a crippled beggar, a stone roundel with Islamic carvings, a medieval coin with an image of Count Roger on horseback, or a 14-century stone slab with the arms of Sicily and Aragon.

The exhibition includes objects of huge historical significance for Malta such as the George Cross, the decree establishing the Republic of Malta, a silver and gold-plated gift from Great Britain on the occasion of Independence in 1964, and the Maltese national flag hoisted during the signing of the EU Accession Treaty at Athens on 16th April 2003.

Important documents are also included, such as the medieval cantilena of Pietro Caxaro from the Notarial Archives, Mikiel Anton Vassalli’s Maltese dictionary of 1796, Sir Temi Zammit’s notebook illustrating archaeological discoveries, and the Malta Government Gazette of 1934 with the declaration on the Maltese language. Grand Master Valette’s suit of armour from the Palace Armoury and a medal awarded to Maltese insurgents during the French blockade are also on display.

While the objects are fascinating, the English translation of the Maltese text occasionally knocked me sideways. Just to give you one example, “id-dfin beda jsir f’postijiet fejn qabel kien hemm djar tal-bliet” is translated as, “burials stood planted within the footprints of the previous towns.” I’m not kidding. If you have an interest in this sort of detail the translation can provide an unexpected source of entertainment as you make your way through the exhibits. This is not as obvious in the attractive exhibition catalogue as here the original Maltese is left out.

The exhibition concept is presumably inspired by the successful BBC radio show and British Museum exhibition which focused on the history of the world in 100 objects. While many of the objects are normally on display at various museums in Malta and Gozo, others are not so easily accessible and seeing them all side-by-side in one space is a unique experience. It was worth a visit.