The Museum of Fine Arts meets a stop sign 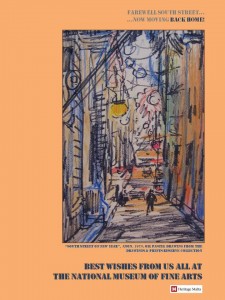 A few years ago the government had decided to move the National Museum of Fine Arts to the large Auberge d’Italie in Merchants Street. The national budget for 2012 allocated 200,000 euros to the project and plans for the move of the museum were set in motion.

The Auberge has spacious rooms and corridors, it has a great central position in Valletta, and it now also has the added bonus of a façade on the new Pjazza de Valette right next to the new open air theatre and St James Cavalier.

The museum’s curator Sandro Debono, had explained that the move to Auberge d’Italie would increase the museum’s available exhibition spaces almost three times over. An appealing part of the move is that Malta’s first national museum was established at the Auberge d’Italie in 1925.

The plan is that the offices of the Ministry for Tourism and Culture and the Malta Tourism Authority, which are now in the Auberge, will move to Admiralty House in South Street instead of the museum. This prestigious old building is not ideal for the National Museum of Fine Arts, but is more than adequate for a ministry.

But according to the Malta Independent today, the current Minister is resisting the move out of the Auberge and the whole plan is going up in smoke. The reason given is that Admiralty House is apparently not big enough for both the ministry and the MTA’s offices.

Ok, maybe it is not big enough for both, but Admiralty House is certainly not too small for a ministry and I can’t see why the MTA must be housed in the same building as the Ministry for Tourism and Culture.

The need to upgrade the National Museum of Fine Arts falls squarely in the lap of the Ministry for Tourism and Culture. Apart from attracting tourists, a major improvement to Malta’s national museum would also give a boost to the arts scene and be a great addition to the 2018 celebrations when Valletta is Europe’s capital of culture.

Tourists are not interested in offices, but they are very interested in museums. Now that plans for the move have already been in the pipeline for two years, how can the Ministry justify blocking the use of one of the grandest buildings in one of the main streets of Valletta for the offices of the MTA, when our national museum is crammed into a smaller building in a less popular street?  The benefits of having the National Museum of Fine Arts in the Auberge d’Italie are obviously far greater for both tourism and culture than having the offices of the MTA in the Auberge.

Museums today do much more than display permanent collections of artworks. They are creative places which encourage interaction, events and learning, and are also popular meeting spots with coffee shops and other facilities. Admiralty House is a fine building but it is very restricted as a museum compared to the possibilities offered by the Auberge d’Italie. We have government offices and ministries all over the place – let’s give the museum and the cultural scene some space to expand!