The old houses at Spinola Bay 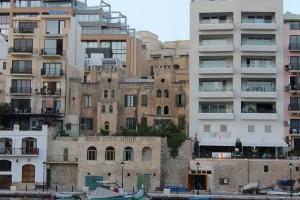 The two old houses in the picture are among the oldest surviving 19th-century seaside villas in Spinola bay. They were already visible in 1898 survey sheets. An application to knock them down and build a block of apartments was turned down twice by MEPA.

As reported in Maltatoday on Sunday, the Appeals tribunal has the final word and has now decided that, while the houses should be retained and restored due to their historic and architectural value, three additional floors of apartments can be built on top. This will bring them in line with the buildings between which they are now sandwiched. Planners like straight lines.

Apart from the neo-Gothic windows, the crenellated turrets on top of the houses are an integral part of the charm of the place. How are these turrets going to fit in with apartments?  I hope that the gardens and boathouses below will be retained and restored in their entirety.

It is a real pity that extra floors will be added on top of these houses, but just click on the picture above. The houses are completely overwhelmed and boxed in by apartments and overly high walls on all sides. A malfunction of the planning system, with no easy way out.

The Appeals board has gone for a compromise solution, which partly preserves the building but still allows the developers to do something. This type of solution needs careful attention, as it does not always give happy results. Just look at the building in Tower Road, Sliema, which was already discussed by Conrad Thake in another blog on this website.

With some imagination and a sensitive design that respects the existing buildings, and as long as the developers are not too greedy, I hope that a decent result can be achieved. It is now up to the architects to rise to the challenge, and for the MEPA planners and Board to insist on it.