The thin edge of the wedge 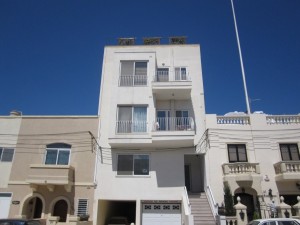 Referring to the recent case of the pseudo-Gothic historic house in Spinola, at 127, Spinola Road, Spinola, Times of Malta requested Din l-Art Ħelwa to comment on the current issue.

When building heights in this street were raised to five floors, an automatic death knell was sounded for any house, let alone this scheduled (Grade 3) historic house in the same street. Automatically, the potential value of six apartments is much larger than that of one house, so it fuelled demolition of traditional houses along the entire street to be replaced with apartment blocks. The result being a historic house hemmed in on both sides with unsightly party walls and obliteration of the view of Spinola Palace beyond.

The historic Spinola has been nearly entirely demolished as a result of bad planning and speculation. We can only encourage Mepa to ensure that the few remaining old buildings in Spinola Hill are protected from further demolition.

The setting of building heights above two floors, where three floors also come along with basements and penthouses, automatically results in houses being demolished to be replaced with apartments. This is not just happening in Spinola but also in all other villages where a blanket three-storey building height was approved in 2006.

It is one of the most perturbing of changes which results in extremely unattractive streetscapes, whether they are new build and, of course, far worse where there are historic properties.

Lino Spiteri, in his Talking Point on December 2, 2013 titled ‘Getting the environment right’, chided NGOs for being dismal in their outlook and too negative in their criticism of Mepa planning policies. This is surprisingly rather short-sighted of someone as intelligent as Spiteri.

Our criticism of policies that allow agritourism hotels in ODZ (not to mention petrol stations and fireworks factories) and two floors or more on three-star plus hotels, comes from knowing that all of this is the thin end of the wedge. Once you put building heights up, the whole street follows. Once you create a precedent in ODZ, it’s a can of worms.

The uglification that we see in Spinola and in other entire swathes of our urban areas is a result of bad planning policies and bad decisions. Once you kick off with a bad start it’s just downhill from there onwards.

The answers are simple.

To quote Evarist Saliba in his blog post comment to Spiteri’s article of December 2, 2013: “The Maltese public is not divided in two camps, those who do not want change and the developers. There is a third camp made up of those who are not against change as long as this is measured so that private greed does not push aside public interest.”

Image caption: Typical case of what is happening with two-storey streets

This article first appeared in Times of Malta (21 June 2014)