The colour is now green 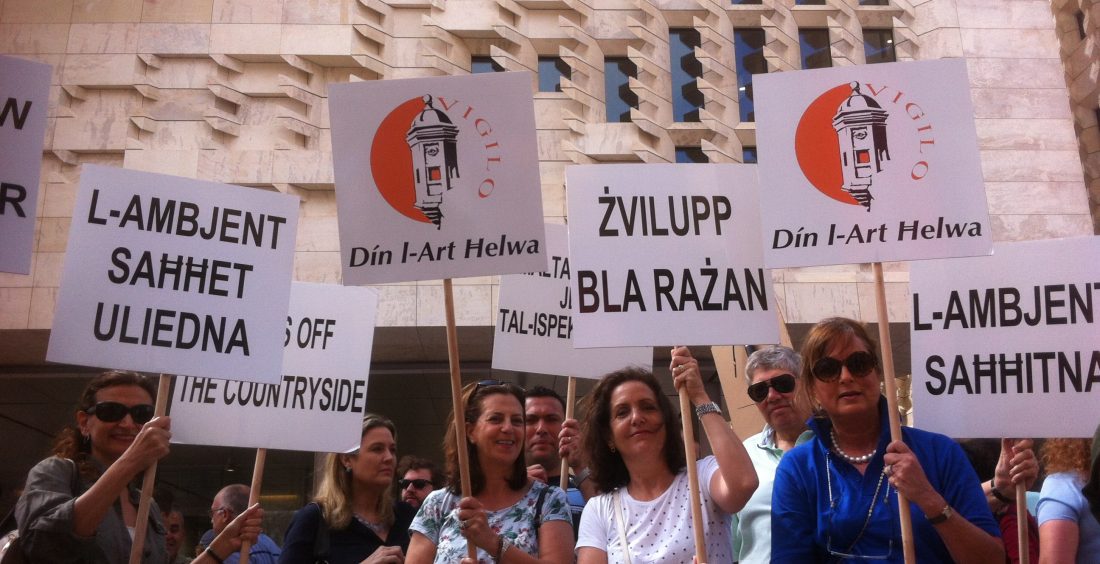 The writing is on the wall, and its colour is green. The mounting tide of the green voter is evident and has been so ever since the anti-spring hunting referendum was lost by a mere 1,111 votes last April, swung by last minute desperado political intervention on the part of our national leader despite the many promises to let the people decide.

Well, the people have decided, turning out last Saturday morning to swell Valletta’s streets in an energetic display of displeasure at the government’s determination to destroy what is left of our countryside and coast.

The Żonqor issue is but a symptom of a much deeper malady that has afflicted the country for several decades which has now reached a point of no return. Forget the much bandied statistics of Malta’s 33 per cent built-up areas. It is more like 70 per cent when you calculate the road network and quarries.

Yet each successive political caste continues to use land for fast gain, and now in great haste. An economy built on construction smacks of poor imagination but the haste can only be rooted in greed.

Using land as a promised commodity, especially unbuilt open spaces (now throwing in a palazzo or two), is the fastest way to turn economic wheels, and to line many pockets. Spaces in ODZ are cheaper and more accessible, with privileged vistas that stretch over the sea, or over rare historic landscapes and green valleys that are shrinking daily.

The government would do well to listen to the increasing number of green voters. It is clear that they far outnumber the development lobby that seemingly holds most of Mepa and a very remote Minister for Sustainable Development in its sway.

Our countryside is besieged not just by our local developers, as if these were not enough, but now by foreign ones as well. The Prime Minister cannot continue to be deaf to the appeals to save our open spaces.

The President of our Republic has made the importance of the countryside for the well-being of society her regular drum beat. Our Archbishop has made his feelings clear, and now the Pope is speaking out about the damage to the environment brought about by human greed. Our Minister of Tourism stated in a newspaper interview last week that Malta is not Dubai, and has no need to be Dubai, a brave statement and true.

Now the people have taken to the streets backing the Front Ħarsien ODZ, with members of all political parties present to support the need to protect our countryside. Bravo to the organisers!

There seems to be yet more writing on the wall, in true poetic justice, from our own man in Brussels, Karmenu Vella, the EU Commissioner for the Environment, who has made it clear that he will have to fine his own country if it fails to end finch trapping and comply with Community rules this autumn. We shall see if green rings true. If not, one day construction will have put paid to the open space needed by trappers anyway.

Yet where land is still easily accessible such as at Żonqor Point, an area so precious for a region that has suffered decades of institutional construction, the government intends to extend its curtain of institutional cement yet again.

The Prime Minister has not chalked up a single green credential yet, but he now has a chance to live up to his party’s 2013 electoral manifesto: “We will protect the environment not because anybody tells us, but because we wish it so for our future generations.”

The Prime Minister can and must take the lead. Parliament is now debating the national policy that should firmly direct the use of space for the next decade, the SPED or structure plan. Its final draft form is still unacceptably vague, but the government accepted last minute appeals from Din l-Art Ħelwa to word it so that construction is directed towards existing urban areas, presumes against demolition of traditional buildings, and protects historic landscapes.

However, two provisos crept in that will forever increase loopholes in favour of development. (Which succeeding government would change this?) These words will allow building of projects in ODZs if they are not feasible in existing urban areas, and will permit construction therein of any sustainable development.

Development through human activity can be infinite, but our countryside is not. I ask on behalf of the green voter, and of those future generations that have no voice, that these two permissive words be cancelled from the new SPED and forever struck off.

Prime Minister, you can do this.