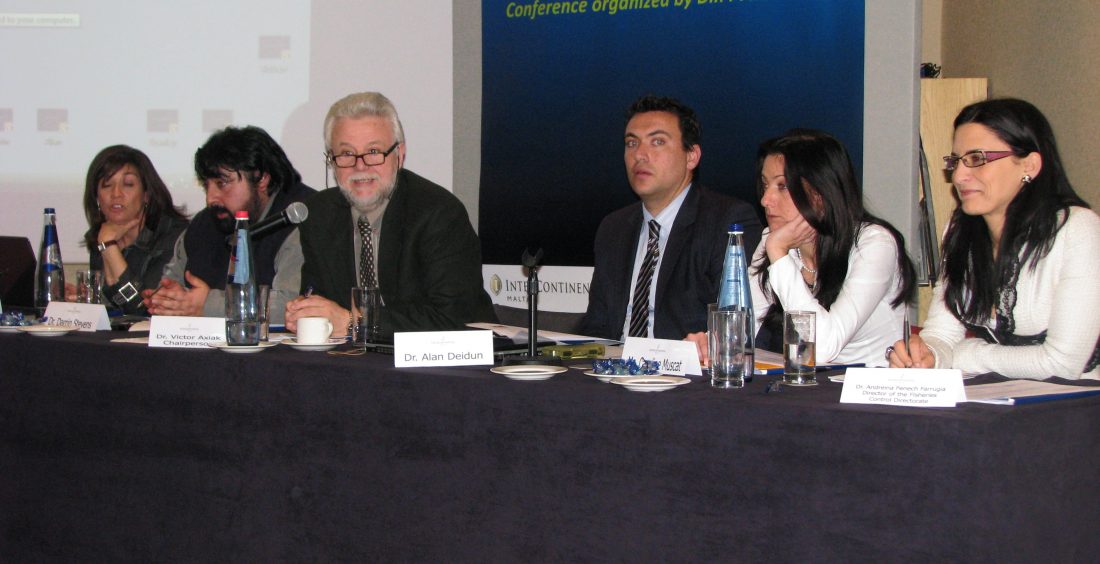 The “Fished Out…?” conference took place to a packed Neptune hall at the Intercontinental Hotel on the 25th March 2011. Organised by Din l-Art Helwa to debate the state of the world’s fisheries, in particular as it related to the Mediterranean and to Malta, the organisation called on several experts to give their views on the

various controversial issues surrounding dwindling fish stocks and the protection of the island’s fragile marine ecosystems and biodiversity. The panel of experts was made up of representatives from Government, Mepa, the Aquaculture Association of Malta, the aquaculture research facility at St Lucien, environmentalists, NGOs, amateur fishermen, marine biologists and students. Dr Victor Axiak, Head of the Biology Department at the University of Malta chaired the proceedings.

The day’s debate was conducted in a most civilised and professional manner, with all sides being able to present their views and with the public able to question and receive answers. Much of the discussions focussed, not surprisingly, around the ranching of blue fin tuna and the risk this species was facing through over fishing although as Dr Victor Axiak pointed out, the whole marine ecosystem was requiring protection and was deserving of discussion.

The representatives of the Aquaculture Association of Malta, an association established to represent the interests of the tuna ranchers and fish farmers, defended claims made by various members of the audience and by Caroline Muscat, journalist, that stocks of this species were not enjoying adequate protection from ICCAT (the International Commission for the Conservation of Atlantic Tunas). According to George Pullicino, Minister for Resources and Rural Affairs, Malta follows the rigorous monitoring systems established by the EU Commission and acts within established EU quotas. The Aquaculture Association of Malta also stated that the reduced quotas established recently by the ICCAT were being followed, that the species faced no danger and that stocks were actually increasing.

Dr Andreina Fenech Farrugia, from the Fisheries Control Department gave a detailed account of the regulatory procedures that commercial and artisanal fisherman had to follow with regard to international monitoring of fishing vessels, the transfer of stocks therein and international documental export practices. Download “Fisheries management in the Maltese Islands” here.

According to the representatives of the tuna ranchers in Malta, the species commercialised in Malta represented only 2% of all tuna landings worldwide and tha furthermore stocks of blue fin tuna were now building again. While this figure was meant to be one of comfort to the environmentalists, it was debatable whether this meant the species was only more vulnerable since, according to published figures. in the last decade blue fin tuna had lost 65% of its stock through over fishing and marketing to the lucrative Japanese market. The fatty qualities of its meat rendered it superior for steaks and sushi to other tuna species such as yellow fin and albacore and therefore far more valuable a commodity. Caroline Muscat said government boasted that exports of this species made up 1% of Malta’s GDP, as if it was an expendable resource easily churned out on a factory’s production line, when government should be doing its utmost to ensure that the livelihoods of traditional fisherman should not be jeopardised by short term commercial practice. Read the whole text of Caroline’s presentation here.

One fact that emerged from the day’s discussions was that, while the size of the tuna caught was regulated and had to fall above the 30 kilo limit to give the adult species time to reproduce, surprisingly the EU as yet afforded no legal protection to swordfish which is another important predator fish facing risk of extinction. Dr Stanley Farrugia Randon, who made an address in favour of the traditional fishermen strongly suggested to government representatives present that, since baby swordfish are often seen on sale in Malta and other local fish seem to have practically disappeared, the protection of these species be put up for urgent discussion in order for legislation to be enacted to ensure that these species be protected. Download “In defence of the traditional fisherman?” here.

Another important development for sustainable fishing in Malta was the progress being made at the St Lucien research facility. Dr Vassallo Agius described the work being done on broodstock recruiting for the aquaculture industry, the development of juveniles and closing the cycle so that broodstock grew into adults. With aquaculture said to represent 48% of the worlds fish food source, research and development of this activity was of paramount importance to Malta. While success was being seen on the farming of seabream, seabass, black meagre, and now amberjack, there was yet some work to be done before the breeding of tuna could be said to be successful.Download “Broodstock Management for Marine Fish” here.

One of the possible solutions to alleviating the effects of the global fisheries crisis is the introduction of Marine Protected Areas. Restricting and managing fishing inside these areas would allow fish stocks to regenerate and this effect would spill over into the adjacent areas. Mr Darrin Stevens gave a comprehensive presentation explaining the definition of a Marine Protected Area, its relation to Natura 2000 and its protection. Download “Marine Protected Areas in Malta” here.

According to Dr John Refalo, representing the Aquaculture Association of Malta with five tuna ranches in Malta operating in four locations, Malta could end up with two separate tuna related activities, ranching from wild stock, and farming from captively bred stock. Currently all commercial Blue fin tuna ranched stock is caught from the wild as opposed to production of seabream, seabass and black meagre which are raised from broodstock. The opportunity for Malta on this second tuna activity could provide great potential, but on the other hand, did not indicate that the activity of tuna ranching of wild stock would be abdicated in favour of the bred stock. This development was considered questionable by environmentalists who said they would be monitoring the situation. Download “Bluefin Tuna – A Maltese Perspective” here. Dr Simeon Deguara, also representing the Aquaculture Association of Malta, gave Bluefin tuna stock levels as presented by the Standing Committee on Research and Statistics, the entity reponsible for policy and procedures to ICCAT. Download“ The Atlantic Bluefin Tuna – Eastern Stock – status update” here.

Anthony Debono, from the student organisation Greenhouse, said Fish4Tomorrow had been formed as an organisation with the aim of raising awareness about sustainable fish species and responsible consumer practice. The group is made up of five NGOs, represented by Greenhouse, Nature Trust Malta, Sharklab Malta, GetupStandup, and Din l-Art Helwa.

Dr Alan Deidun gave a presentation about the increasing presence of jelly fish blooms and the hazards they represent to the fishing industry, to the balance of marine ecosystems and even to infrastructural machinery such as that of the reverse osmosis plants which are situated on the coast. Jelly fish spotting was important and any member of the public should report any unusual or increased presence. Download “The Impact of Jellyfish Outbreaks and alien species on Fisheries” here.

82% of the worlds fish stocks are over exploited and 20% are fished beyond sustainable limits. The main causes identified have been increase in consumer demand, harmful national subsidies that increase fishing fleets to increase fishing capacity, catch limits which in many cases overpassed consumption, some 25% wastage, IUU – illegal, unreported and unregulated fishing – and inadequate enforcement of regulated practices.

Dr Joe Borg, former EU commissioner, gave a detailed account of the EU’s Common Fisheries Policy reform whose aim is to develop a package for the replacement in 2013 of the current failed 2002 Policy. The reform should address and correct the many problems with overcapacity and overfishing. This is the EU’s vision for 2020, and annual targets have to be met to ensure this vision is achieved but this would also depend upon willingness by the many nations of the EU to take up and enforce these measures. Improved legislative measures would also be required for the protection of the world’s fisheries to address international pressures by countries outside the EU and. Download “The Upcoming Reform of the European Union’s Common Fisheries Policy” here.

A multitude of issues are involved when considering the global fisheries scenario. Maritime, fisheries and environmental laws are all involved and this is further complicated by cross-border differences and political systems creating a neccessarly fragmented regime. Dr Simone Borg’s presentation investigated these and other factors that need to be taken into account when attempting to harmonize the sector. Download “Governance of Marine Areas and the Conservation of Marine Living Resources” here.

At the close of the day, Simone Mizzi, Executive President of Din l-Art Helwa said that while it neither within the organisation’s remit to decide which was the right way forward and nor was it possible to offer solutions after just a day’s discussion, it was correct to conclude that responsibility was required by all stakeholders. ‘As ordinary consumers, we need to eat more responsibly and amateur fisherman need to fish more responsibly by observing local regulatory practices, but it was also very true that the commercial fishing industry whose profits were disproportionate to the jobs it provided, should also be investing in research funding and be held rigorously to the observation of international regulatory requirements. Failing this, it would be the responsibility of our generation if magnificent predator fish such as blue fin tuna and swordfish became extinct on our beat’. Ms Mizzi concluded by saying the day’s discussion was only a launch pad for future discussions. Din l-Art Helwa would ensure further debate that would allow the public to have the opportunity of questioning official statistics and learn of improved legislative and enforcement measures. The event was sponsored by Medserv Ltd and Din l-Art Helwa with the assistance of the Intercontinental Hotel.