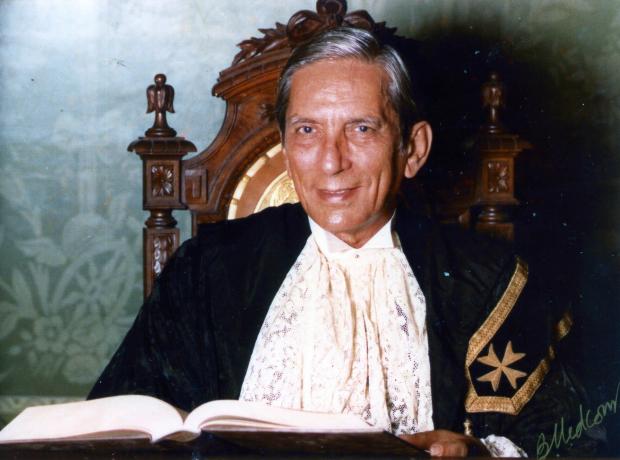 Maurice Caruana Curran, who has died aged 96, possessed two essential qualities that distinguish the leader from the others. Those qualities were judgement and courage.

As a judge he was noted for his independent mind and his forthright defence of human rights. Described by a former President of Malta as “the island’s bastion of liberty”, he served on the Bench for 20 years, handing down some landmark judgments in criminal, civil and commercial law, which are models of fairness and clarity.

But while there will be deserved plaudits for his long, versatile and distinguished career as a lawyer, as Malta’s Attorney General and a judge, it will be as the pioneer of Malta’s national heritage and environmental movement that he will be long remembered. For it was to this cause that his outstanding qualities of judgement, courage and leadership were directed for 50 years, first as the president, then, latterly, as he grew older and more frail, as its founder president – a member of the council of Din l-Art Ħelwa to the very end. He was immensely proud to see it celebrating its Golden Jubilee this year.

In July 1965, at the age of 46, together with a group of intellectuals and scholars – like-minded lovers of Malta’s history, art and cultural heritage – he founded Din l-Art Ħelwa, Malta’s national trust, a voluntary organisation to assist the newly-independent sovereign State of Malta to uphold article 9 of the Constitution “to safeguard the historic, natural and artistic patrimony of the nation”.

He was soon to become an outspoken and fearless defender of Malta’s natural environment and cultural heritage. With his selfless and unwavering commitment to the ideals of conservation and the power of example set by Din l-Art Ħelwa, its restoration projects and its educational initiatives, he succeeded in arousing the awareness of the public and of initially reluctant and unseeing successive governments to the importance of Malta’s extraordinary heritage.

He lobbied against the misuse of land, the destruction of our traditional vernacular architecture, overdevelopment, greedy speculation and the effects of uncontrolled mass tourism.

A serene impartiality of judgement was among his virtues. His unerring foresight in focusing early on the dreadful effects of uncontrolled development on the islands he loved has come to haunt us all.

He did this with grace and courage, even in the face of much personal, sometimes politically-motivated criticism, as well as public inertia. He led the organisation he had founded for 33 years, right up to his 80th birthday, through highs as well as some deep lows (including personal family tragedy), summoning up year upon year the energy, dedication, stamina, commitment and enthusiasm to achieve the objectives he had set.

For his life’s work, he was honoured by Malta with the Order of Merit and awarded the Europa Nostra Silver Medal for Dedicated Service to European Cultural Heritage.

Patriot is a much overused word, usually hijacked by politicians who tend to want to wrap themselves in the national flag. Maurice will be remembered as a true Maltese patriot. Although half Irish, his love and loyalty to the place of his birth, his deep knowledge of its art and heritage (we could ask him nothing about Malta’s history to which he did not know the answer) transcended everything.

A man of warmth, passion, wide learning and wisdom – the two are not always the same thing – a poet, an actor, a man of selfless leadership, his creation of Din l-Art Ħelwa was a timely and far-seeing, as well as far-reaching, act for which he will be forever remembered. The numerous monuments and historic sites in Malta and Gozo, which were saved for the nation as a direct result of his personal intervention, bear vivid testimony to his battles to save them and the awareness of our cultural heritage which we enjoy today.

Stated simply, his view was that we are here on earth to do good to others. He can reflect that he left his mark on Malta in a way most men could only dream of. Today, Din l-Art Ħelwa flourishes and the importance of Malta’s cultural heritage is both recognised and supported in a way not thought possible 50 years ago.

This is the legacy for which Ċettina, his loving and loyal wife, his two beloved children, Paul and Simone – who is now herself an outstanding executive president of Din l-Art Ħelwa, to Maurice’s great pride and satisfaction – their families, and all of us in Din l-Art Ħelwa, who he regarded as part of his extended family, can all be well and truly thankful.

We extend our deepest sympathy to them all. May he rest in peace.