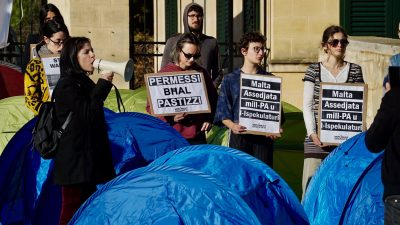 Din l-Art Helwa expresses its support for the aims of the direct action by Moviment Graffiti, who are currently camping outside the Planning Authority’s premises in Floriana. The protest rightly highlights the PA’s failure to amend the fuel service station policy.

Din l-Art Helwa joins the protesters in slamming the Planning Authority’s utter incompetence, by having failed to provide a sound and timely policy review on the relocation of fuel stations to outside development areas.

The PA is enabling the destruction and over-exploitation of natural and agricultural land by fuel stations, ignoring the wider picture. DLH demands that no further permits for the relocation of fuel stations from urban to rural areas should be granted until this policy review is satisfactorily concluded, giving priority to the protection of Malta’s dwindling natural environment.