Atlantropa – when Malta would have ceased to exist 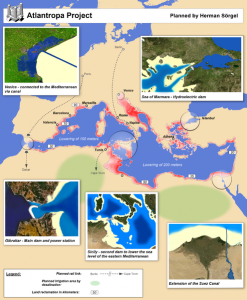 How do you increase the physical landmass of a small island like ours? (without entering the merits of whether we should be even attempting to do that).The most obvious answer is reclamation of low-lying coastal areas with all the inherent ecological repercussions on the marine ecosystem. Proposals for land reclamation have recently resurfaced in local debates although to date most of it has been within the realm of fuzzy hot air devoid of serious economic feasibility and environmental impact studies.

In the late-1920s, the German architect Herman Sörgel (1885-1952) conceived the Altantropa project, a gigantic engineering and colonization project that was intended to lower the sea levels of the Mediterranean basin by some 100 metres in parts and 200 metres in others. He envisioned the construction of a hydroelectric dam across the Straits of Gibraltar that would not only have generated an immense supply of hydroelectricity but with the construction of four additional mega-dams in different parts of the Mediterranean would have led to a considerable lowering of sea levels. Vast areas of sea would be drained and would be added to the existing landmass. Almost the entire Adriatic Sea between the Italian peninsula and the Dalmation coast would have been totally drained up, with Venice becoming an inland city by several hundred kilometres and connected to the newly defined sea by a narrow canal. The Aegean Sea would have resembled more Lake District than an open sea. The Maltese islands would have ceased to exist as an archipelago and with the lowering of the sea by 200 metres, Malta would have become totally conjoined with Sicily and physically absorbed within its land mass.

Sörgel’s project was motivated by concepts of pacifism, economic neo-colonization with an underlying dose of racial overtones of incorporating the European and African continents into one combined new continent to be called Altantropa. The visions and ideas of Sörgel had quite a following in the late 1920s/30s, and even after the Second World War he continued to propagate his ideas until his death in 1952.

In retrospect with the passage of time Altantropa, appears as a hollow megalomaniac vision destined to failure, a dystopia which would have had cataclysmic effects on our marine environment and coastal settlements. But it also illustrates the point that the temptation to play God with our environment is at times an-all-too-common human weakness. It is a warning to us all not to experiment with nature and the ecosystem for the repercussions may be totally unpredictable and well beyond our control.