The recently-launched proposals for the revision of ODZ policies (downloadable from www.mepa.org.mt/public-consultation) are being  touted as being absolutely justifiable and are being branded and marketed in terms of appealing motivations, ranging from ‘giving agrotourism a sorely-needed boost’ or ‘giving genuine farmers the possibility to expand their activities’. However, if one cares to scratch beyond the surface, one will notice that the plethora of proposals being made contain an equally vast plethora of planning loopholes, which effectively render the same proposals extremely DANGEROUS. The sheer extent of the proposals warrant dedicating more than one article to such an issue.

The ODZ policy revision document kicks off with an unimpressively biased statement – ‘The spirit of this document is to allow whoever genuinely needs to upgrade or redevelop an existing building or to construct a new one outside the development zone, in conjunction with its use.’ ‘Whoever’ literally means anyone, without discriminating if the applicant is a genuine farmer or a ruthless land speculator. Someone might have a ‘genuine need’ to convert his farmhouse into a villa, but does this render him eligible for such a permit under the revised policies?

Two of the most treacherous proposals included in the document include the one to assign ‘more responsibility to external consultees’ and to ‘allow a 10% tolerance in all developments as a flexibility extension.’ The former opens a Pandora’s box since, with hindsight, consultee opinions in DPA reports are not considered as very reliable by a number of MEPA Board members since they tend to change tack too frequently. In addition, the document is vague once again since it does not specify who these consultees are, besides the Agriculture and Veterinary departments. The latter proposal is downright unacceptable for two reasons: (i) 10% is way too high for ODZs, especially in a country whose built-up fraction is a full six times the EU average and (ii) entrenching such leeway from the very outset is an invitation for trouble, since developers will seek to exploit, through default, the 10% elbow room, as if it was a given.

Perhaps the most dangerous aspect of the whole document is that it will ultimately promote larger buildings in the countryside, with a consequent negative visual impact, by supporting the ‘consolidation of scattered permitted or pre-1967 buildings’, when smaller structures, on small islands like ours devoid of gargantuan farm holdings, would make more sense than much larger ones. For purposes such as storage of pesticides, tools, etc. 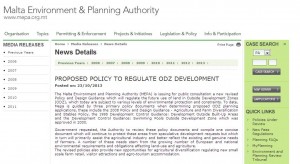 More on such an issue very soon.