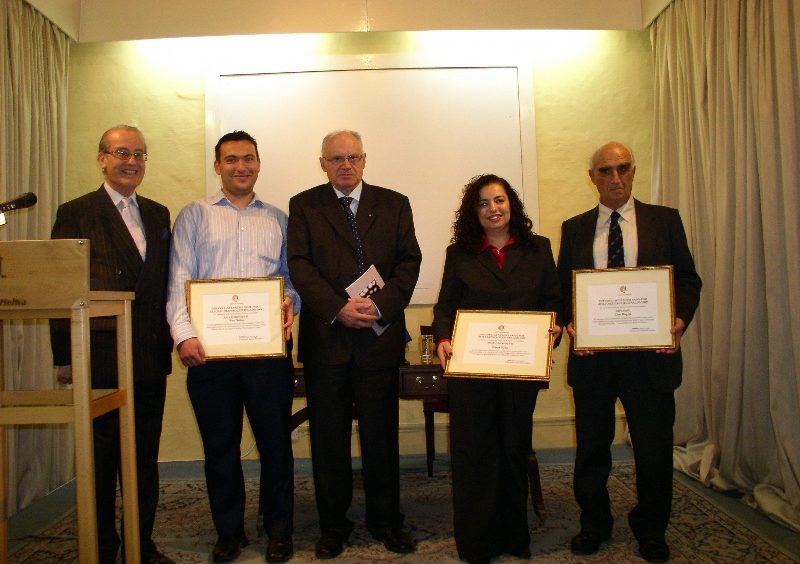 2 December 2009 – Din l-Art Helwa has announced the 2009 Built and Natural Heritage Journalism Awards to those journalists whose publications most raised awareness on Malta’s built and natural heritage in the last year. There were fifteen entries: eleven in English and four in Maltese coming from The Times, The Sunday Times, It-Torca and Il-Gens Illum, and also one from MEPA, who submitted their comprehensive ‘One World’ series for consideration. The Awards were presented by President Emeritus, Dr. Ugo Mifsud Bonnici together with Martin Scicluna, Vice President of Din l-Art Helwa.

The winner of the Prix d’Honneur for Natural Heritage Journalism was Alan Deidun for his article ‘The Forgotten Islets of Filfla, Comino, Fungus Rock and St Paul’s Islands’, which vividly described the islets’ wealth of flora and fauna as well as their unique history.

The winner of the Prix d’Honneur for Built Heritage Journalism went to Fiona Vella for her article in It-Torca, ‘Ic-Cimiterju b’ghajnejn Ohra’ which re-told the story of the building of the Addolorata Cemetery, the Maltese fascination over the centuries with the sanctity of Malta’s burial places together with the story of some of its most striking monuments. The article ended with a plea – which appears to have been heeded – for the authorities concerned to take action about the poor state of some parts of the cemetery which need urgent conservation.

Diplomas were also awarded to Lino Bugeja, for his articles ‘The Impending Rape of Our Arcadian Beauty’, a cri de Coeur for the looming destruction of the valley of Ramla il-Hamra and, more widely, the massive loss over several years of so much of our natural landscape as well as for his article in The Sunday Times on ‘The Grand Harbour’s Role in History’ which told the story of the built heritage around the Grand Harbour highlighting the need of urgent restoration to many of the fortifications and palaces.

President Emeritus Dr Ugo Mifsud Bonnici after presenting the awards, made an appeal for the media to take on a wider role in furthering awareness of built and natural heritage and stressed the responsibility that remained with all in mass communication in the education of the public.

Martin Scicluna thanked the judges, Mario Schiavone, Simone Mizzi, Malcolm Naudi, and paid tribute to Philip Zammit Briffa, whose recent loss has been felt by all in Din l-Art Helwa where, as former Secretary General, he was Chairman of the Awards Jury Panel and the organisation of the Awards schemes.

In his concluding remarks Martin Scicluna, said that the aims of the awards are clear. Din l-Art Helwa wants to encourage the writing press to focus on articles or writing campaigns to under-score the vital contribution made by Malta’s rich heritage – both its built heritage and its landscape heritage – to our history and culture, as well as the over-riding need to protect it. He also thanked newspaper owners and editors for the high profile and coverage they are giving to the great problems brought about by climate change, air pollution, the search for alternative energy, over-development, the depletion of our natural resources thus ensuring that these are kept high in government’s and the public agenda.