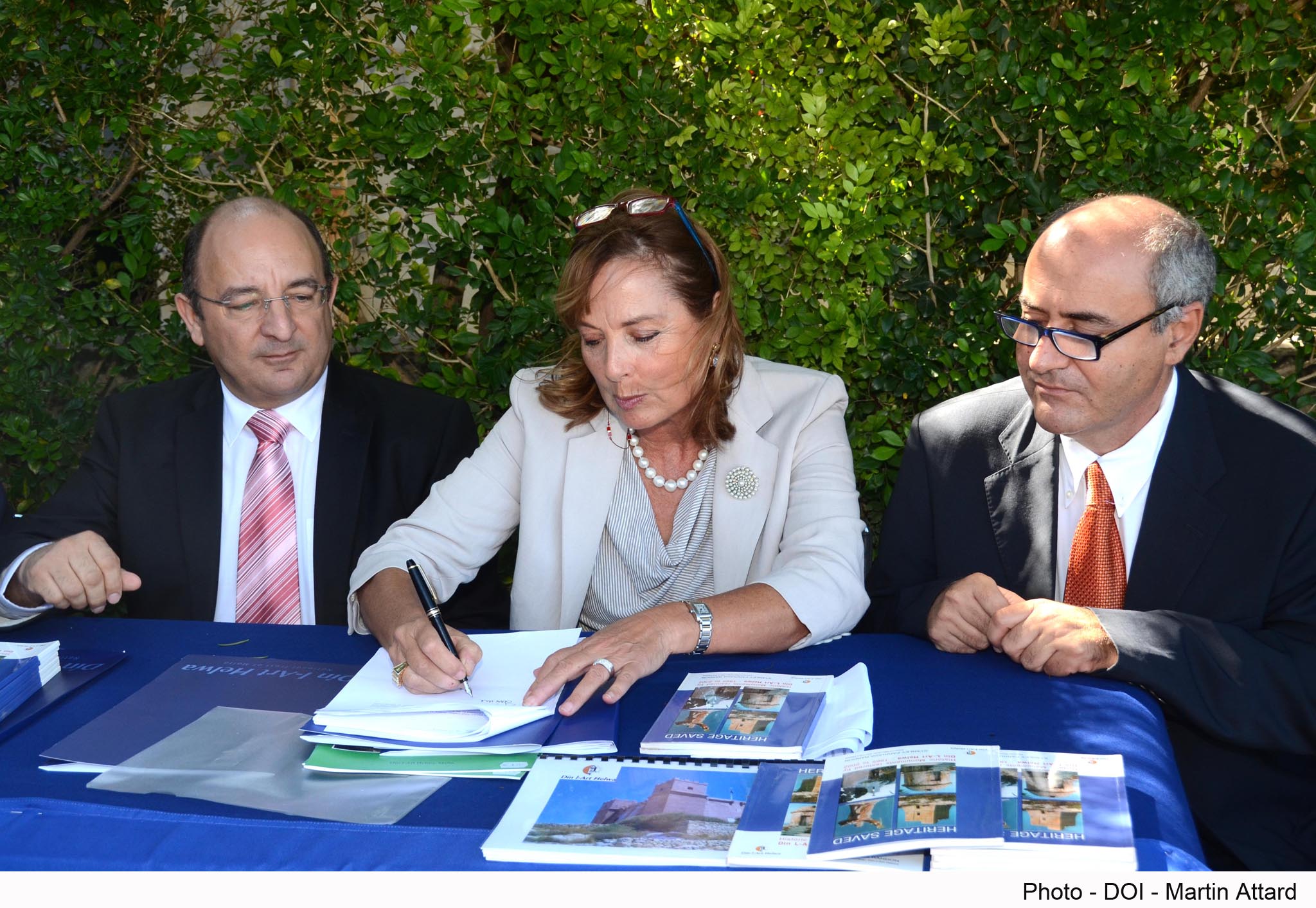 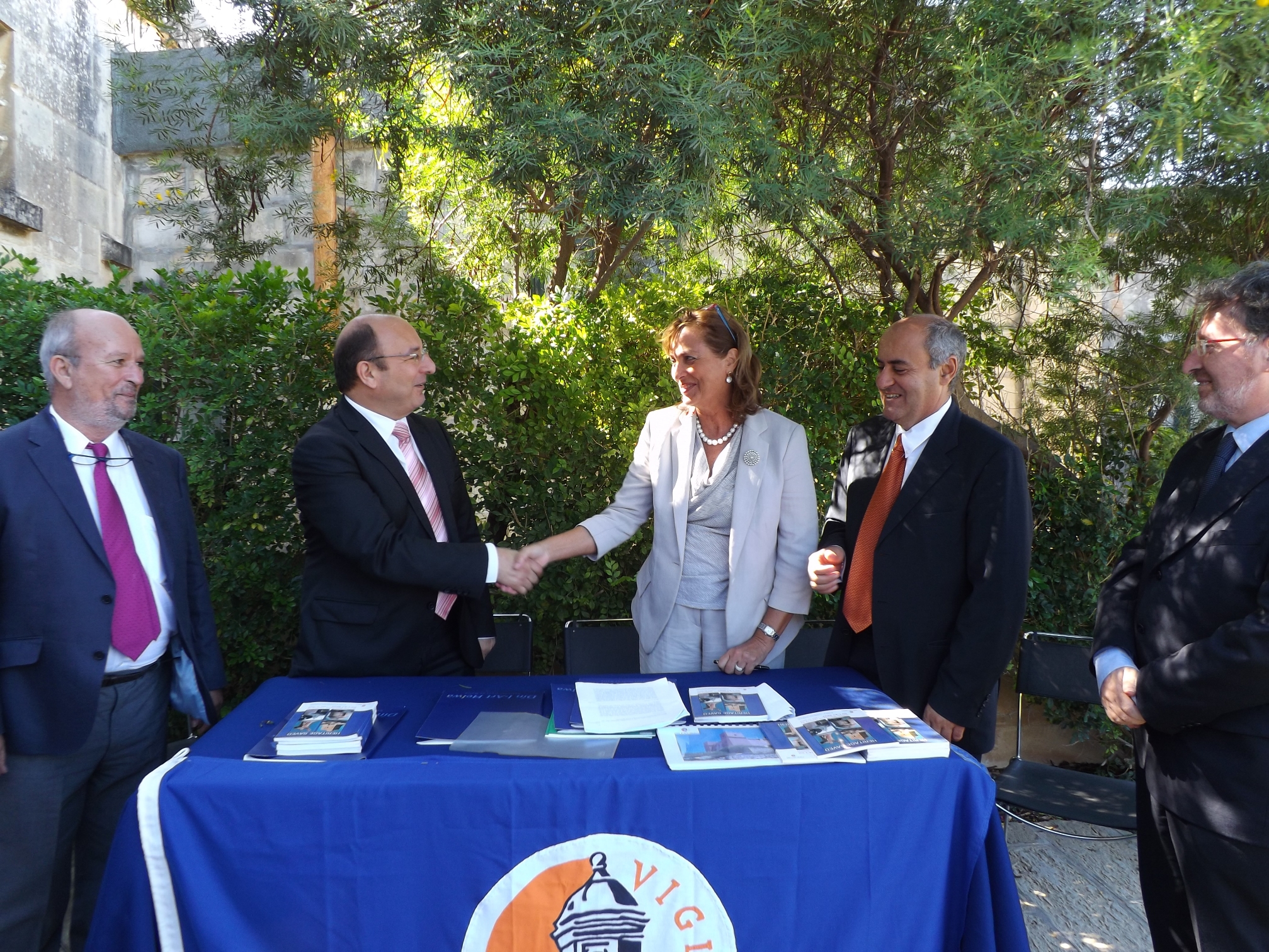 Din l-Art Helwa has again been entrusted with the guardianship of 10 historic sites including the coastal watch tower at Wied iz Zurrieq.  This was announced by the Parliamentary Secretary for Lands, Dr Michael Farrugia, and the Parliamentary Secretary for Culture, Dr Jose Herrera in a symbolic signing ceremony held at the Msida Bastion Garden of Rest, a site restored and managed by Din l-Art Helwa. Present for the ceremony was Dr Anthony Pace, Superintendent of Cultural Heritage who signed the deeds with the Executive President of Din l-Art Helwa, Simone Mizzi, and George Camilleri, Secretary General.

It was in February 2003 following legislation for the 2002 Cultural Heritage Act that the first ever Guardianship deeds were signed with Din l-Art Helwa.  This was the first time in the history of heritage protection that historic sites could be entrusted by Government in a stringent legal document of a ten-year duration to an NGO. The 9 heritage sites, notably Red Tower, Santa Marija Tower and Santa Marija Battery, Wignacourt Tower, Torri Mamo, Dwejra Tower and Ghallis Tower and Qaliet Marku Tower, as well as the Msida Bastion Cemetery and Garden of Rest had already been restored by Din l-Art Helwa.  Now after ten years, Din l-Art Helwa has been again entrusted with their care.   Simone Mizzi confirmed that government has chosen to entrust the organisation with the care of another historic site, the Wied iz-Zurrieq Tower which is in urgent need of restoration.  These 10 sites had been abandoned and were literally crumbling, but thanks to the generosity of Din l-Art Helwa’s sponsors and the generosity of private individuals, and the hard work of the organization’s volunteers, these sites and many others have been saved for the nation.

Din l-Art Helwa was founded in 1965 with a mission to protect and enhance Malta’s rich built and natural heritage.  It has saved 37 landmarks and monuments over the years and maintains several open spaces such as Foresta 2000 below the Red Tower, the Majjistral Park and historic gardens.  At the Msida Bastion Garden of Rest Din l-Art Helwa volunteers worked 11 years on hands and knees to piece together 20,000 shattered stone fragments in order to put its neo classic monuments back into place.  The project was awarded the 2002 Silver Medal for restoration by Europa Nostra.

Simone Mizzi said that in the last ten years Din l-Art Helwa has dedicated some 2.5 million euros on the care of the sites it manages or restores.  In 2012, DLH volunteers gave some 20,000 hours freely to this work, and over 400,000 Euros were ploughed into the economy through restoration proving that heritage brings sustainable activity, provides many jobs and improves our environment adding value to the quality of life on the island and to tourism.  At this particular time, added Simone Mizzi, DLH is working on several projects: namely that of completing the Delimara Lighthouse, the complex restoration of Victory Church, Valletta, the upgrade of the small museum at Garden of Rest to improve its amenities and access, and at Sarria Church, conservators have just resumed work on the magnificent Immacolata, Mattia Preti’s titular painting. This will be finished by the 8th December, feast day of the Immaculate Conception.

Together with DLH Council Members, Ms Mizzi thanked the government for having faith in the organization and praised all the volunteers, in particular the five former Executive Presidents, who for nearly fifty years have worked with such commitment giving freely of their time to Malta.  In this sense by signing the very first renewals of Guardianship Deeds, Din l-Art Helwa too has made history for heritage.

Finally Ms Mizzi made an appeal to Government to protect the traditional character of our old town and village centres from development and speculation.  Regeneration of dilapidated areas should be encouraged not demolition.  Once the charm of these urban centres is gone, it is gone forever, losing the quality that makes them solely Maltese.  Ms Mizzi also appealed to government to not allow new building to take place within the countryside as Malta’s open rural spaces are getting rarer and need protection from construction.